In this fascinating video, the CBC follows a couple who needed to recover thousands of pictures from an iPhone after it was dropped in water. The video shows how Jessa Jones, who specializes in iPhone repair, is able to get the dead phone working again so that the couple can get their priceless photos back.

The kicker, though, is that Apple’s official forums ban Jessa and others who point out this option to iPhone users. In fact, users are frequently told that recovering data from dead or damaged iPhones is impossible, and that those who claim they can do so are scammers. Jones herself regularly has her posts deleted and account banned for simply stating the truth–that there is a good chance that a third party repair service will be able to assist in recovering the data.

As Jones points out in a subsequent video on Louis Rossman’s YouTube channel, Apple is actively harming its users with this absurd tone deaf approach. Someone who seeks to recover their memories from a device deserves more from Apple than boilerplate “if it wasn’t backed up to iCloud it can’t be recovered” nonsense.

So T-Mobile shipped my Samsung Galaxy Note 8 pre-order out a couple weeks early. While configuring and playing around with what is the best phone I’ve ever owned, I was struck by one of the main differences between buying a Samsung phone vs. what I observe when people buy an iPhone.

My wife has always owned iPhones, for example. She has never had the experience, to my knowledge, of paying almost $1,000 for a phone and then needing to do the following:

My wife and other iPhone users don’t do this for, say, Siri because in large measure they simply want to use their phones to accomplish whatever it is they want to accomplish, and they don’t mind Apple constraining their choices.

This is why I have never used iPhones. If I were the sort of person who wanted a damn button that I had no control over which launched an annoying voice command system, I wouldn’t buy Android phones.

One of the odd things about technology is that a good portion of users of a given company’s technology tend to become fanboys of that company. So when Apple bans a game that mocks its (and other tech companies) labor practices, you will find no shortage of defenders of that and even worse decisions or practices.

For some people, apparently, the technology they use and love becomes such a part of their identity that the thought that the company that makes the technology might do awful things is threatening and has to be countered at every opportunity.

A better way to think about our relationship to corporations who make the products we use everyday might go something like this: these companies suck. They don’t care about the same things their customers do (except, to the extent their customers are also worried about the company’s quarterly profits and stock price). Occasionally, the interests of customers and a corporation interests overlap, but when something changes the corporation will screw the customers over and not even bother to buy them dinner.

Take Google’s Android. Every phone I’ve ever owned has been an Android. When all is said in done, I prefer both the Android OS to Apple’s iOS, and I prefer Google’s business practices to Apple’s.

But I harbor no illusions that Google is anything but a ruthless profit maximizer whose “Don’t be evil” slogan is about as reliable as Tim Tebow’s deep pass threat.

Google had no problem, for example, banishing AdBlock Plus from the Google Play store. Google’s justification for removing AdBlock Plus and other ad block apps was that they “interfere with or accesses another service or product in an unauthorized manner,” which is a violation of the Play Store’s Terms of Service.

What AdBlock Plus actually does is run in the background on Android as a proxy and removes ads. The nice thing is it removes ads both within web browsers as well as in-app ads.

So Google’s claim is that any software that lets a user install a proxy and to use that proxy to filter incoming data is a violation of the Google Play Store’s TOS. A clear-cut case where Google’s interests as an advertising sales company suddenly conflicts harshly with the interests of its customers.

The nice thing about Android is I can get AdBlock Plus up and running on my phone without needing to root/jailbreak it. Unlike Apple’s model for iOS, I can download AdBlock Plus directly and install it or turn to alternative app stores. Of course, it also knows that the average Android phone owner is probably not going to know how to do that or be willing to do that.

I suspect things like this are going to happen more frequently.

One of the things that Android fan boys have been celebrating is Android overtaking iOS in smart phone market share. This is a mistake–personally, I was hoping Android would continue to play second fiddle to iOS.

Many of the things that make Android great, including Google’s general handling of Android, are byproducts of Android needing to overcome the iOS juggernaut. Android is more open than iOS simply because Google had no other choice if it wanted to overcome Apple’s market lead.

As Google’s market lead becomes solidified and some of its decisions to open source Android start to bite back at Google, I suspect it will take Danny Sullivan’s advice and ultimately create a closed phone OS.

And then it will be time to look for other projects or companies where, for now, the interests of customers and the company coincide, such as the phone OSes being developed by Canonical and The Mozilla Foundation.

I ran across this article from a few months ago by Matt Honan criticizing Apple’s Siri “Siri, When Will Personal Digital Assistants Finally Work?” (maybe he should have called it “when will Siri make people take computer security seriously, but that’s another article). The articles goes on and on about how awful Siri is compared to Android voice search.

Being a Certified Apple Hater (seriously — I had to take a test for that), I’m up for any article that bashes Apple and trumpets Android, except in this case my real world experience contradicts Honan.

First, as far as I’m concerned, voice systems are awful especially when they actually work. I’ve blogged before about my freaking Kinect screwing up my Netflix viewing experience when someone in the room utters the wrong goddamn set of phonemes. Moreover, there is nothing more annoying than sitting in a room with someone else who is talking to their phone or tablet.

But for Christmas, my kids each got an iPad. My son’s usage of the iPad was pretty much what I expected — games and web browsing. I was curious, though, how my daughter would use the iPad because of her unique learning disabilities. She is one of about 20-30 people identified so far who have a duplication of genes on a specific chromosome that causes an odd conjunction of cognitive limitations. In general she has a lot of trouble moving from specifics to generalizations which, among other things, means that even though she’s only 16, she reads at maybe a 3rd grade level.

Somehow she discovered Siri on her iPad, though, and it is now a frequent companion. If my 10-year-old son wants to know a geeky fact like how much the moon weighs, he goes to Google and finds the answer. Something like that would be extremely difficult for my daughter, but she quickly learned that “Siri, how much does the moon weigh?” will get her a usable answer almost all of the time.

She will sit and ask Siri questions for 20-30 minutes at a time. She is very impressed that Siri “knows” her name and will greet her with a “Good Morning, Emma.” When I asked her what she thinks of Siri, she told me “Siri is like having a sister.” 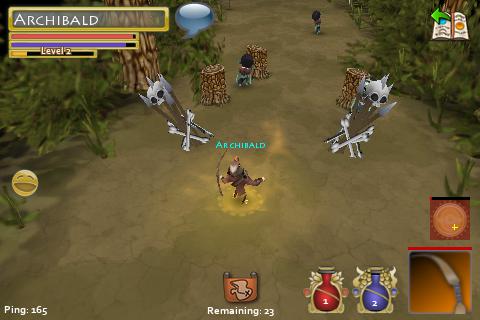