From the designers of Rock, Paper, Wizard comes an all-new game of Striking, Showboating, and making hand signals! Players select their favorite Superstar and work to gain the most popularity and reach the briefcase at the top of a 3-D ladder while making sure their opponents don’t get there first.

Each round, players select shared techniques, or their Superstar’s signature technique, and simultaneously chant “Money!” “In The!” “Bank!” before revealing their technique, and their target. Comeback cards and the Underdog token mean that you’re never more than a few well-chosen techniques away from the lead!

According to Wikipedia, Rock Paper Scissors can be traced back to 3rd century BCE China,

The first known mention of the game was in the book Wuzazu [zh] by the Chinese Ming-dynasty writer Xie Zhaozhi [zh] (fl. c. 1600), who wrote that the game dated back to the time of the Chinese Han dynasty (206 BCE – 220 CE). In the book, the game was called shoushiling. Li Rihua’s book Note of Liuyanzhai also mentions this game, calling it shoushiling, huozhitou, or huaquan.

Mushi-ken, the earliest Japanese sansukumi-ken game (1809). From left to right: slug (namekuji), frog (kawazu) and snake (hebi).
Throughout Japanese history there are frequent references to sansukumi-ken, meaning ken (fist) games where “the three who are afraid of one another” (i.e. A beats B, B beats C, and C beats A). This type of game originated in China before being imported to Japan and subsequently also becoming popular among the Japanese.

The earliest Japanese sansukumi-ken game was known as mushi-ken, which was imported directly from China. In mushi-ken the “frog” (represented by the thumb) triumphs over the “slug” (represented by the little finger), which, in turn prevails over the “snake” (represented by the index finger), which triumphs over the “frog”. Although this game was imported from China the Japanese version differs in the animals represented. In adopting the game, the original Chinese characters for the poisonous centipede were apparently confused with the characters for the slug. The most popular sansukumi-ken game in Japan was kitsune-ken. In the game, a supernatural fox called a kitsune defeats the village head, the village head defeats the hunter, and the hunter defeats the fox. Kitsune-ken, unlike mushi-ken or rock–paper–scissors, is played by making gestures with both hands.

In a just universe this would be a real product rather than just an entry in a design portfolio, 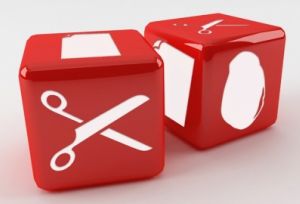 However, there is a rock, paper, scissors dice game that was created to study RPS outcomes in game theory.

For those rock-paper-scissors masters out there, comes a new variant that adds much-needed complexity to the game of kings — Rock-Paper-Scissors-Lizard-Spock. Live long and prosper . . . and watch out for those lizards!