I wonder if we’ll ever see a Chloe Sullivan figure, maybe with a Crazy Cult Chloe variant.

Beginning this month, Mattel begins releasing its series of Retro-Action DC Super Heroes based on the Mego line from the 1970s. These aren’t straight up copies of the Mego toys. For example, the initial Green Arrow toy available directly from Mattel on Dec. 15th is billed as a “a more accurate Green Arrow.”

Mattel currently has an initial three waves of four figures planned for sale at Toys R Us, with the initial set going on sale in early 2010 featuring Superman, Green Lantern (Hal Jordan), Sinestro and Lex Luthor.

No word on whether they plan to also produce any of the vehicles such as the Green Arrow Car or the awesome Justice League playset. 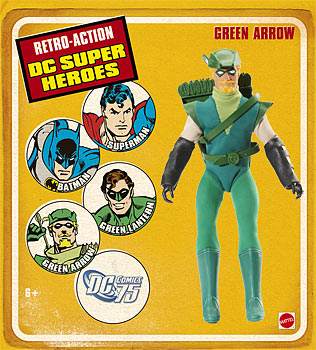