Found at Cunt of Doom, 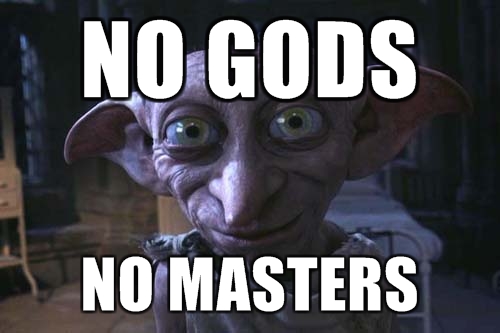 Not a fan of anything Harry Potter related, but this t-shirt is clever, 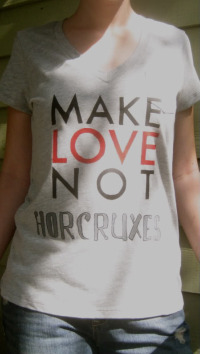 The Associated Press reports that to no one’s surprise the final Harry Potter book will not be available in an e-book version.

According to the AP,

Rowling has cited two concerns over the years: concern about online piracy . . . and the desire for readers to experience the books on paper.

The paper claim is nonsense given the numerous audio versions of the books. And, frankly, Rowling’s obsession with how people read her book is a bit odd (you can imagine some composer saying there’s no way in hell people are going to listen to his music on some vinyl record when the only way to truly appreciate it is in a live performance).

As for piracy, not releasing an e-book version guarantees that it will be widely pirated. All not releasing an official e-book version means is that rather than buy a legitimate electronic edition the day the book comes out, fans will simply have to wait a day or two after the release to download a warez version of the book. It takes about five minutes to locate and download the various unauthorized electronic editions of the Potter books online.

So a large number of people are already defying Rowling’s paper passion — she’s just not benefiting from it.

Slashdot was the first site I saw to point out that JK Rowling won this year’s Hugo for best science fiction novel for Harry Potter and the Goblet of Fire.

I wouldn’t have been surprised if Harry Potter and the Sorceror’s Stone had won a Hugo a few years ago, but Goblet of Fire is not only inferior to the other books nominated, but its inferior to Rowling’s other books.

In fact, the one thing Rowling has in common with the folks who write genre fiction series is that her books are getting more bloated and less interesting with every passing book (remember Goblet of Fire was so bloated, that everyone in the process missed an obvious inconsistency between it and a previous book in the series until after the huge worldwide launch of the book). Halfway through Goblet I thought I was reading a Robert Jordan novel.

I’m starting to see a lot of Harry Potter-related merchandise — a lot of it decidedly tacky — but one thing we’ll apparently never see is a Harry Potter role playing game. According to Wizards of the Coast’s Ryan Dancey, series author J.K. Rowling “has flatly stated that she’ll never approve a role playing game in any format.”

That’s okay. People will just go on making their own Potter RPGs online.