This is a leaflet produced by the Nazis in 1944 urging American soldiers to surrender in order to not be killed in 1945.

The text translates to something like, “Darken! The enemy sees your light!”

A German court has bizarrely upheld a ban that prevents German comic Jan Boehmermann from reciting or republishing a poem that he wrote criticizing Turkish president Recep Tayyip Erdogan. According to the BBC, it was the numerous sexual references that the court found unacceptable.

I frequently see people argue for the United States to abandon its expansive First Amendment protections and instead adopt a more European approach to speech (especially with regards to so-called “hate speech.”) What could possibly go wrong?

Or, alternately, if saying Erdogan is a goat-fucker is wrong, I don’t wanna be right.

This English translation of the poem has been floating around the Internet, but I could not track it down to the original source. Many thanks to the translator.

Stupid as fuck, cowardly and uptight,
Is Erdogan, the president,
His gob smells of bad döner,
Even a pig’s fart smells better,
He’s the man who hits girls,
While wearing a rubber mask,
But goat-fucking he likes the best,
And having minorities repressed,

Yep, Erdogan is definitely
The president with a tiny dick,
Every Turk will tell you all,
The stupid fool has wrinkly balls,
From Ankara to Istanbul,
They all know the man is gay,
Perverted, louse-infested, a zoophile,
Recep Fritzl Priklopil

Head as empty as his balls,
Of every gang-bang party he’s the star,
Till his cock burns when he has a piss,
That’s Recep Erdogan,
The Turkish president.

It’s really weird when I run across a subculture in another country that mirrors some of the stranger American subcultures. Here in the United States, for example, we have a “sovereign citizen” movement where individuals do not believe they are subject to the government of the United States, most typically due to a bizarre reading of the Fourteenth Amendment of the Constitution or one of several Acts of Congress.

Germany, however, has its Reichsbürgerbewegung–individuals who do not recognize the authority of the German government due to similar reasoning,

The self-described Reichsbürger (“Reich citizens”) maintain that the Federal Republic of Germany is illegitimate and that the Reich’s 1919 Weimar Constitution remains in effect. Most of their arguments are based on a selective reading of a 1973 decision of the Federal Constitutional Court concerning the Basic Treaty between West and East Germany. The judgement held that the 1949 Basic Law for the Federal Republic of Germany (Grundgesetz) itself assumes that the Reich, as a subject of international law, despite the German Instrument of Surrender and the Allied occupation, had survived the collapse of Nazi Germany, but is incapable of acting as a state because it lacks any organization, such as governmental authorities.

The Reichsbürger do not, however, cite the Court’s further holding that the Federal Republic is not a successor state to the Reich, but, as a West German state at that time partially, and today—since 1990—fully identical to it. Instead they claim to have restored the governmental bodies of the German Reich and to be capable of acting on the basis of the Weimar Constitution.

The original Kommissarische Reichsregierung was founded in 1985 by Wolfgang Gerhard Guenter Ebel, a former Reichsbahn traffic superintendent in West Berlin. Ebel, who appointed himself Reich Chancellor, claimed to be acting on the authority of the Allied occupation authorities. Some of the members of his “cabinet” later fell out with Ebel and established provisional governments of their own with names such as Exilregierung Deutsches Reich or Deutsches Reich AG (the latter being based in Nevada, USA).

KRRs engage in activities such as issuing currency and stamps, as well as promoting themselves through the Internet and other media. Where the number of their adherents allows, they also emulate the “re-established” institutions, such as courts or parliaments, of the Weimar Republic or of earlier German states. Temporarily a restored Reichstag existed as well as several Reich Ministers, state governments, and a Reichsgericht.

As with the sovereign citizen movement in the United States, the Reichsbürgerbewegung is apparently composed largely of individuals who subscribe to far right wing political views.

These are the games allegedly pulled from sale in Germany:

I ran across this photo on Twitter the other day, without any caption or explanation. It turns out it was taken on June 13, 1936 at the Blohm + Voss shipyard in Hamburg, Germany. A newly completed training vessel was being launched that day and all of the workers assembled to witness the launch and give the Nazi salute.

And although there are a few people in the photo not giving the salute, the man in the middle of the circle is emphatically refusing to give the salute (click the photo for a larger version). 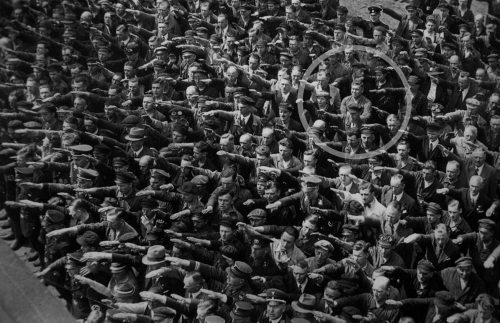 The man is believed to be August Landmesser who originally joined the Nazi Party in 1931, but was expelled due to his relationship and subsequent attempt to marry a Jewish woman. According to Wikipedia’s summary of Landmesser’s life and death,

August Landmesser was the only child of August Franz Landmesser and Wilhelmine Magdalene (née Schmidtpott). In 1931, hoping it would help him get a job, he joined the Nazi Party. In 1935, when he became engaged to Irma Eckler (a Jewish woman), he was expelled from the party. They registered to be married in Hamburg, but the Nuremberg Laws enacted a month later prevented it. On 29 October 1935, Landmesser and Eckler’s first daughter, Ingrid, was born.

A now-famous photograph, in which a man identified as Landmesser refuses to give the Nazi salute, was taken on 13 June 1936.

In 1937, Landmesser and Eckler tried to flee to Denmark but were apprehended. She was again pregnant, and he was charged and found guilty in July 1937 of “dishonoring the race” under Nazi racial laws. He argued that neither he nor Eckler knew that she was fully Jewish, and was acquitted on 27 May 1938 for lack of evidence, with the warning that a repeat offense would result in a multi-year prison sentence. The couple publicly continued their relationship, and on 15 July 1938 he was arrested again and sentenced to two and a half years in the concentration camp Börgermoor.

Eckler was detained by the Gestapo and held at the prison Fuhlsbüttel, where she gave birth to a second daughter, Irene. From there she was sent to the Oranienburg concentration camp, the Lichtenburg concentration camp for women, and then the women’s concentration camp at Ravensbrück. A few letters came from Irma Eckler until January 1942. It is believed that she was taken to the Bernburg Euthanasia Centre in February 1942, where she was among the 14,000 killed; in the course of post-war documentation, in 1949 she was pronounced legally dead, with a date of 28 April 1942.

Meanwhile, Landmesser was discharged from prison on 19 January 1941. He worked as a foreman for the haulage company Püst. The company had a branch at the Heinkel-Werke (factory) in Warnemünde. In February 1944 he was drafted into a penal battalion, the 999th Fort Infantry Battalion. He was declared missing in action, after being killed during fighting in Croatia on 17 October 1944. Like Eckler, he was legally declared dead in 1949.