World War I-era propaganda poster in which Jesus blesses the German Army as it passes by.

The German text translates to,

Go on soldier! And fulfill your duty! Christ, the good shepherd watches over his flock. Our Father in heaven, hallowed be your name, Your kingdom come, your will be done, on earth as in heaven.

The posthumous trial of Pope Formosus (816-896 BCE) reads like bad fan fiction. According to Wikipedia,

Jean-Paul Laurens, Le Pape Formose et Étienne VII (“Pope Formosus and Stephen VII”), 1870 (note the latter is now called Pope Stephen VI)
Pope Stephen VI, the successor of Boniface, influenced by Lambert and Agiltrude, sat in judgment of Formosus in 897, in what was called the Cadaver Synod. The corpse was disinterred, clad in papal vestments, and seated on a throne to face all the charges from John VIII. The verdict was that the deceased had been unworthy of the pontificate. The damnatio memoriae, an old judicial practice from Ancient Rome, was applied to Formosus, all his measures and acts were annulled and the orders conferred by him were declared invalid. The papal vestments were torn from his body, the three fingers from his right hand that he had used in consecrations were cut off and the corpse was thrown into the Tiber (later to be retrieved by a monk).

Following the death of Stephen VI, Formosus’ body was reinterred in St Peter’s Basilica. Further trials of this nature against deceased persons were banned, but Pope Sergius III (904–911) reapproved the decisions against Formosus. Sergius demanded the re-ordination of the bishops consecrated by Formosus, who in turn had conferred orders on many other clerics, causing great confusion. Later the validity of Formosus’ work was re-reinstated. The decision of Sergius with respect to Formosus has subsequently been universally disregarded by the Church, since Formosus’ condemnation had little to do with piety and more to do with politics.

Bartolomeo Platina writes that Sergius had the much-abused corpse of Formosus exhumed once more, tried, found guilty again, and beheaded, thus in effect conducting a second Cadaver Synod, while Joseph Brusher says that “Sergius [III] indulged in no resurrection-man tactics himself” and Schaff, Milman, Gregorovius, von Mosheim, Miley, Mann, Darras, John the Deacon of Naples, Flodoard, and others make no mention of this story.

I have no idea if this is legitimate or not, but somebody has created Christ Coin, “the first pre-mined Christian-based Cryptocurrency.”

Where does the value come from?

Christ Coins are simply a points system.  Because this point system is block chain based, the points can be traded on markets as tokens. People can buy and sell these tokens, or hold for an increase in purchasing power.

Obligatory joke here about Jesus expelling the prime number traders from the temple. 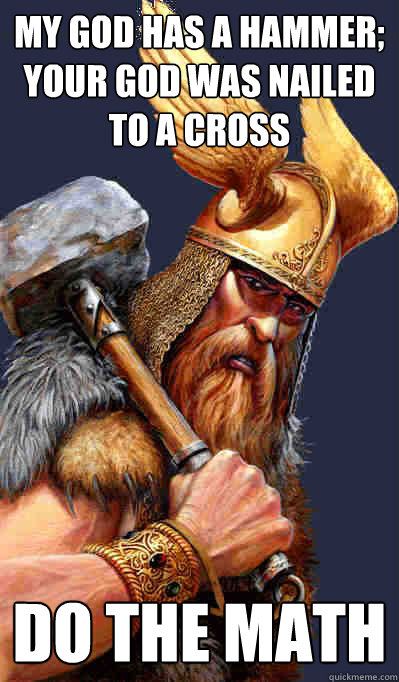 God’s Crime Scene may be the most appropriately titled work of Christian apologetics ever.

There are four ways to die, and only one of them requires an intruder. Suicides, accidental, and natural deaths can occur without any evidence from outside the room. But murders typically involve suspects external to the crime scene. If there’s evidence of an outside intruder, homicide detectives have to prepare for a chase. Intruders turn death scenes into crime scenes.

Join J. Warner Wallace, former atheist, seasoned cold-case detective, and popular national speaker as he tackles his most important case … with you on the jury!

With the expertise of a cold-case detective, J. Warner examines eight critical pieces of evidence in the “crime scene” of the universe to determine if they point to a Divine Intruder. If you have ever wondered if something (or someone) outside the natural realm created the universe and everything in it, this is the case for you.

Let me offer my prediction: God did it, in the Middle East, with the genocidal ravings.