Alderac Entertainment Group (AEG) is making a Batman-themed version of its popular Love Letter game in which players attempt to round up escaped villains from Arkham Asylum (the original game revolves around suitors trying to get love letters through to a princess through intermediaries).

Take back the streets of Gotham City! The most notorious villains in Gotham City have escaped Arkham Asylum and it’s up to the Dark Knight to round them up and return them to their padded cells! Batman comes together with the award-winning Love Letter to bring a new style of play to this hit game. Featuring new rules that put you in the cowl of the Dark Knight, you’ll fight to capture the most dangerous criminals in Gotham City! Love Letter: Batman Edition is a game of risk, deduction, and luck for 2-4 players. Earn Batman Tokens by eliminating opponents and by winning each round for a new spin on classic Love Letter! Featuring quick play and easy to learn rules, Love Letter: Batman will be a hit for any Bat-Fan! 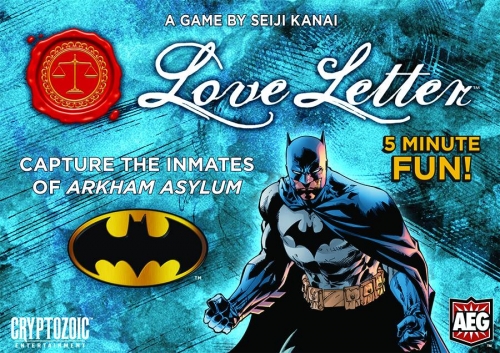