According to Wikipedia, Stalin’s monument was a 51-foot tall granite statue honoring Joseph Stalin that was located in Prague, Czechoslovakia.

It was unveiled on 1 May 1955 after more than 5-1/2 years of work, and was the world’s largest representation of Stalin. The sculpture was demolished in late 1962.

This is what the monument look like for the few years before it was destroyed.

Below is a photograph of the monument being blown up. Again, according to Wikipedia,

The process of de-Stalinization began shortly after the unveiling of the monument. The monument, therefore, became an increasing source of embarrassment to the Communist Party of Czechoslovakia, and was taken down with 800 kilograms (1,800 lb) of explosives.

Fialka (M-125) is the name of a Cold War-era Soviet cipher machine. A rotor machine, the device uses 10 rotors, each with 30 contacts along with mechanical pins to control stepping. It also makes use of a punched card mechanism. Fialka means “violet” in Russian. Information regarding the machine was quite scarce until c. 2005 because the device had been kept secret.

Fialka contains a five-level paper tape reader on the right hand side at the front of the machine, and a paper tape punch and tape printing mechanism on top. The punched-card input for keying the machine is located on the left hand side. The Fialka requires 24 volt DC power and comes with a separate power supply that accepts power at 100 to 250 VAC, 50–400 Hz.

The machine’s rotors are labelled with Cyrillic, requiring 30 points on the rotors; this is in contrast to many comparable Western machines with 26-contact rotors, corresponding to the Latin alphabet. The keyboard, at least in the examples of East German origin, had both Cyrillic and Latin markings. There are at least two versions known to exist, the M-125-MN and the M-125-3MN. The M-125-MN had a typewheel that could handle Latin and Cyrilic letters. The M-125-3MN had separate typewheels for Latin and Cyrilic. The M-125-3MN had three modes, single shift letters, double shift with letters and symbols, and digits only, for use with code books and to superencrypt numeric ciphers.

This is a fascinating look at a museum dedicate to arcade games from the Soviet era.

With two locations in both Moscow and St Petersburg (opened in 2007 and 2013 respectively), the museum plays host to an wide collection of original video game and electromechanical machines, which not only showcase the uniqueness of Russian engineering and industrial design, but also reflect Soviet ideology of the time – their themes intended to provide practical skills (driving, shooting and aiming), rather than what might be regarded as more trivial pursuits like shooting down exotic invaders from space or saving stranded princesses from the clutches of oversized gorill

Gorbanevskaya was one of eight dissidents arrested for a demonstration in Moscow’s Red Square protesting the Soviet invasion of Czechoslovakia. She was subsequently held in a psychiatric hospital until 1972. In 1975 she was allowed to emigrate to France.

The sad thing is that even with the end of the Cold War, some things change in degree but not kind,

Earlier this year she and others held another protest in Red Square making the 45th anniversary of the invasion.

They were briefly detained by authorities for holding an unauthorised protest.

Strange Maps digs up interesting and oddball maps and sometimes more. For example, there’s this map that was the cover of a 1951 issue of Collier’s that was devoted entirely to a hypothetical occupation of the Soviet Union by U.S-led United Nations forces. Conelrad.com has a more complete look at the way Collier’s fictional scenario was played out in the magazine. 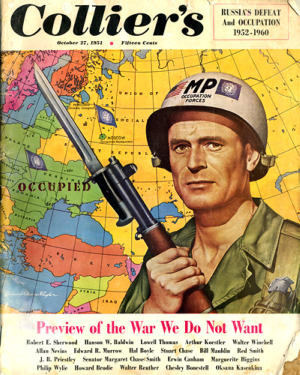