I ran across Tim O’Neill’s History for Atheists site one day by chance while looking for a succinct analysis of the oft-repeated and inaccurate claim made by some atheists that Easter is a pagan tradition, derived from the Anglo-Saxon goddess Eostre.

O’Neill had written an essay about this myth, Easter, Ishtar, Eostre and Eggs. O’Neill did an excellent job of debunking this claim, but what I really appreciate was how he traced back the origins of this myth, ironically to a 19th century anti-Catholic minister.

Alexander Hislop (1807-1865) was a minister in the Free Church of Scotland and parish schoolmaster in Caithness. He was a vehement critic of anything to do with Catholicism and became convinced that while good Protestants like him followed the true faith of Jesus Christ, the Catholic Church was actually the ancient Babylonian mystery cult of Nimrod, an obscure pagan figure mentioned a few times in the Old Testament. According to Hislop, Satan allowed the Emperor Constantine (him again) to hijack the true Christian faith and lead it into idol-worship and Papist errors and that it was only by recognising this and throwing off any pre-Reformation vestiges that people could return to true Christianity.

Hislop seems to be the ultimate point of origin for the claims that Ishtar and Eostre were the original source of Easter, thanks to the wickedness of Catholics and, of course, Satan. He devotes a whole section [of his book The Two Babylons] to the pagan origins of Easter in his chapter on the wicked Satanic festivals of the Catholic Church . . .

As O’Neill mentions earlier in that post, too many atheist online will “pontificate about evidence reason, scholarship and fact-checking, but then merrily post any old crap if it has a suitably anti-Christian slant.”

History for Atheists is a nice antidote for that sort of credulous antitheism.

Bruce Schneier recently wrote a bit about the Aspidistra transmitter which the Allies used during World War II to spread disinformation in Nazi Germany.

During air raids, the Germans would turn off their radio transmitters so the Allies wouldn’t be able to use them for direction finding. As soon as the genuine German transmitters went off the air, the Allied deception would kick in. According to Wikipedia,

When a targeted transmitter switched off, Aspidistra began transmitting on their original frequency, initially retransmitting the German network broadcast as received from a still-active station. As a deception, false content and pro-Allied propaganda would be inserted into the broadcast. The first such “intrusion” was carried out on March 25, 1945, as shown in the operations order at the right.

On March 30, 1945, “Aspidistra” intruded into the Berlin and Hamburg frequencies warning that the Allies were trying to spread confusion by sending false telephone messages from occupied towns to unoccupied towns. On April 8, 1945, “Aspidistra” intruded into the Hamburg and Leipzig channels to warn of forged banknotes in circulation. On April 9, 1945, there were announcements encouraging people to evacuate to seven bomb-free zones in central and southern Germany. All these announcements were false.

The German radio network tried announcing “The enemy is broadcasting counterfeit instructions on our frequencies. Do not be misled by them. Here is an official announcement of the Reich authority.” The Aspidistra station made similar announcements, to cause confusion and make the official messages ineffective.

You have to love the sheer stupidity of the Nazis telling the German people the airwaves have been compromised by the enemy, but adding you can trust this broadcast. Maybe Hogan’s Heroes wasn’t all farce after all.

JohnHorse.Com is an extensive, but ultimately frustrating, look at the role that rebellious plantation slaves played in the Second Seminole War. Bird claims that by April 1836, almost 400 slaves had “defected to the Seminoles.”

The site’s author, J.B. Bird, argues that professional historians have largely ignored the large number of slaves who left their plantation to join the Seminoles in fighting against white plantation owners due to a bias toward diminishing acts of resistance by slaves. He doesn’t, however, provide any sort of critical look at traditional historian’s view of the role of black slaves in the Second Seminole War, so we’re left taking his word for it.

Frankly, although the site has some interesting information, the thing it is being noticed and praised for widely is the same thing that I found extraordinarily annoying — the site breaks up this extensive information about John Horse, the Seminoles, and plantation slaves into 400 small chunks of information Power Point style. That pretty much kills the narrative flow and makes it difficult to follow Bird’s argument as a whole.

Its a shame he doesn’t have the full text of his chunked-up thesis on the Seminoles available somewhere on his site for those who want more than the slideshow version of his research.

Today is the 60th anniversary of The 228 Incident in which protests by native Taiwanese on this date in 1947 led to the wholesale execution of Taiwanese leaders by Chiang Kai-shek’s forces who occupied Taiwan after Japan’s defeat in World War II.

According to TaiwanDC.Org, in addition to those outright killed,

Thousands of others were arrested and imprisoned in the â€œWhite Terrorâ€ campaign which took place in the following decades. Many of these remained imprisoned until the early 1980s. Until the beginning of the 1990s, the events of 1947 were a taboo subject on the island. The Kuomintang did not want to be reminded of their dark past, and the Taiwanese did not dare to speak out for fear of retribution by the KMTâ€™s secret police

Wikipedia also has a long entry about the incident and its aftermath.

San Jose State’s Thayer Watkins has a fascinating account of hyperinflation during the early years of the breakup of Yugoslavia (no, really!)

That was bad enough, but of course like other regimes before it, Yugoslavia tried to counter this hyperinflation with a series of price controls. But the result, not surprisingly, was simply to make the situation much worse since the hyperinflation was occurring far faster than the government could update prices even on government-owned goods, so it was essentially giving many goods and services away free,

James Lyon, a journalist, made twenty hours of international telephone calls from Belgrade in December of 1993. The bill for these calls was 1000 new new dinars and it arrived on January 11th. At the exchange rate for January 11th of 1 DM = 150,000 dinars it would have cost less than one German pfennig to pay the bill. But the bill was not due until January 17th and by that time the exchange rate reached 1 DM = 30 million dinars. Yet the free market value of those twenty hours of international telephone calls was about $5,000. So despite being strapped for hard currency, the government gave James Lyon $5,000 worth of phone calls essentially for nothing.

And so on. But, of course as Watkins notes, the Yugoslavian government’s position was that all of its economic problems were due solely to Western sanctions.

English Russia has a nice collection of Soviet era anti-American propaganda posters. Some of them are brutally ironic, like this one touting the USSR’s supposed superior economic output as compared to the United States (complete with blatantly anti-Semitic portrait of a capitalist), 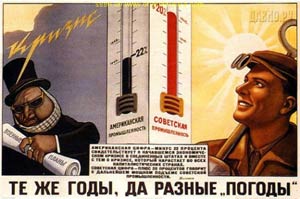 Or this gem that is sort of Norman Rockwell with a commie twist (the text apparently describes how the USSR is always opening new schools, while the U.S. is being forced to close schools!?!?), 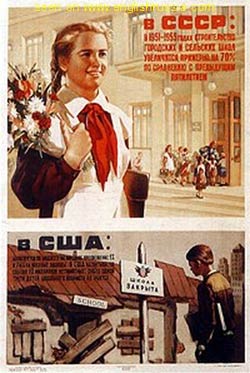