Mattel’s Facebook page includes an album featuring photos of all of the DC Universe Classics figures released so far. 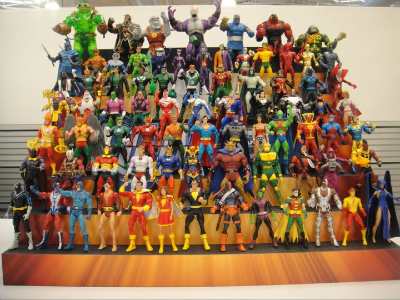 I want to love the DC Universe Classics* series of toys, but too many times the frustration of finding a specific figure is just more than I’m willing to deal with so I basically just ignore the entire line. . . .And time and again Mattel shows a complete lack of concern for the fans — kinda like the Masters of the Universe Classics line — and way too much love for retailers like Wal-Mart.

I think I’ve got every figured from the DCUC line through about Wave 8 when I gave up on it. I’ll still occasionally  by figures I happen across, but trying to get a complete set of even a single wave is becoming ridiculously hard and expensive.

But as one of the commenters to Reed’s story notes, a big part of the problem is the sheer popularity of the DCUC line. Bottom line is that if the Toys-R-Us near me puts a new case of figures out overnight, by 5 p.m. the next day most of the figures in that case are bought and already listed on EBay.

My local comic book store always gets a small number of action figures that also show up in mass retail chains, and usually there’s a 40-50% markup at the comic store as compared to the mass retailers. On DCUC, however, I’ve seen figures marked up 200 to 300 percent immediately — that’s not the store being greedy, but rather a recognition that this is what the market price for this figures really is. If they put them at MSRP they’ll be gone in a day and up on EBay.

For the most part, if I really want a DCUC figure these days I’ll just preorder online. Otherwise, I just don’t worry about it anymore.

Mattel’s collector-oriented webstore, MattyCollector.com, is currently selling action figure stands for Justice League Unlimited and DC Universe Classics figures. Those JLU figures are especially a pain in the ass to display, so this is a nice addition. Both are available in 25-packs for $12 plus shipping. 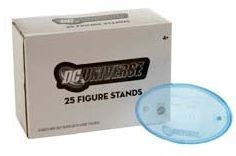 A couple weeks ago, Mattel launched its online collector store MattyCollector.com. Basically, the store offers hard-to-find and exclusive figures. They offered limited quantities of their SDCC figures, for example. 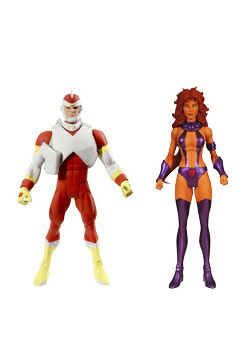