Warlands is a “a full throttle miniatures combat game of vehicular mayhem on a post-apocalyptic earth” being developed by Aberrant Games and scheduled for a February 2009 release (though since it is now February 2009 and the website doesn’t appear to be updated much, it is likely the game has been delayed). Think large-scale Mad Max style battles.

Strange Eons is a free cross-platform application written in Java designed to assist in making professional looking custom content for Fantasy Flight’s extremely popular Arkham Horror board game. Using the program, people have created everything from new investigators — including taking pop culture icons like SpongeBob SquarePants or the Buffy characters and converting them into the game — to creating entire expansion packs for the game. The sheer volume of free content out there for Arkham Horror created with Strange Eons is amazing. If you love Arkham Horror half as much as the cultists do, you need to check this out.

Innsmouth Escape is a board game from Twilight Creations where one side plays a human being trying to escape from Innsmouth and the other players take on the role of Deep Ones trying to kill him. 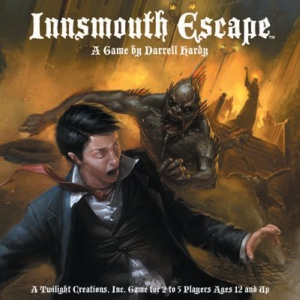 Red November is an amusing concept for a boardgame. The players are onboard an experimental gnomish submarine that has gone haywire and must find a way to stay alive until rescuers can arrive. Cooperative boardgames FTW. 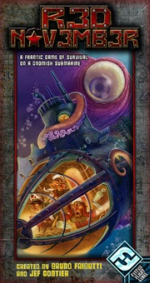 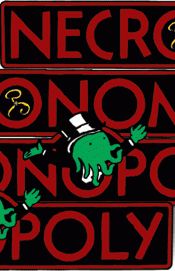 Players move around the board, collecting properties and artifacts – all that their Sanity can handle. At the same time players must dodge Monsters and Great Old Ones. Players move clockwise and Monsters move counterclockwise, knocking the marbles out of the players’ heads.

As soon as a player loses all his Sanity, he goes insane and becomes a Cultist, moving counter-clockwise like a Monster, robbing the other players of their Sanity. The object? Be the last sane player in the game!

Mayfair Games publishes a kids version of Settlers of Catan called, appropriately enough, Kids of Catan. Reviews of the game indicate its largely a game where everything is random with essentially zero strategy (which, of course, is also one of the criticisms that many people have of Settlers). Also a bit on the expensive sided at $49. 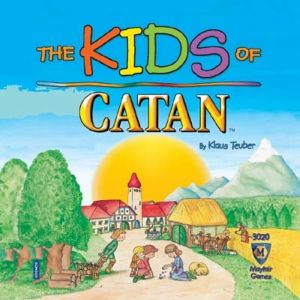