Part of the background noise about Barack Obama when he was a candidate was that, as someone who had taught Constitutional law, he would have more respect for the Constitution and its principles than Those Other Guys(TM). So far, though, it doesn’t seem to be working out that way.

For example, the U.S. Solicitor General filed an amicus brief in a case urging the Supreme Court to overturn its 1986 Michigan v. Jackson ruling. The decision in Michigan v. Jackson is pretty straightforward — when a suspect has requested legal representation at an arraignment or other court proceeding, the suspect cannot waive that right unless he or she initiates communication with police.

Edwards is grounded in the understanding that “the assertion of the right to counsel [is] a significant event,” 451 U.S. at 451 U.S. 485, and that “additional safeguards are necessary when the accused asks for counsel.” Id. at 451 U.S. 484. We conclude that the assertion is no less significant, and the need for additional safeguards no less clear, when the request for counsel is made at an arraignment and when the basis for the claim is the Sixth Amendment. We thus hold that, if police initiate interrogation after a defendant’s assertion, at an arraignment or similar proceeding, of his right to counsel, any waiver of the defendant’s right to counsel for that police-initiated interrogation is invalid. Although the Edwards decision itself rested on the Fifth Amendment and concerned a request for counsel made during custodial interrogation, the Michigan Supreme Court correctly perceived that the reasoning of that case applies with even greater force to these cases.

The position of the Obama administration, however, is that this rule is no longer needed as there are plenty of other rules and procedures in place to prevent police coercion of suspects.

But as an amicus brief (PDF) in support of Michigan v. Jackson filed by former prosecutors and other law enforcement officials noted,

. . . Jackson links two key criminal procedural rights — the Sixth Amendment right to counsel under Gideon v. Wainwright and the Fifth Amendment rights of an accused under Miranda — which are fundamental to the adversary process and maintain public confidence in our criminal justice system. Discarding Jackson would undermine both rights. Allowing the police to initiate interrogation of a represented defendant and to use any resulting statements would strip away protections the attorney can provide, interfere with the relationship between counsel and client, and undercut the integrity of criminal trials…To abandon a rule that safeguards them would erode the public confidence they foster. It would signal that enduring legal principles and important constitutional rights are no longer so enduring nor so important.

It would not have been surprising at all to see the Bush administration argue to dispense with such restrictions on police power. With the Obama administration, however, its a bit shocking to realize just how far separated the reality is from the high-minded rhetoric.

Instead, the Republicans and the Democrats both subscribe to the simple pragmatic view that their business is doing whatever it will take to win elections, and damn any principles.

His latest column, however, points up the main problem with the Republican Party, and with Sowell’s argument, which is chiefly that conservatism, as an ideology or a set of principles, is utterly bankrupt. Its adherents can only try to out-shout the Democratic Party that they could do a better job of “managing” the country and the economy, when the best solution is to get the government out of the economy and back to its Constitutional mandate of protecting individual rights. But such a solution is as abhorrent to the Republicans as it is to the Democrats. It would entail a relinquishment of power and the repudiation of not only the welfare state, but of the roles of God, family and other “traditional” values in the GOP platform. Any other course of action will guarantee a sentence of irrelevancy of the Republican Party.

Not going to happen, of course, but I doubt the Republican Party will be sentenced to irrelevance. Rather the continued reduction in any palpable difference in the substantive positions of either party will continue. Certainly the targets may be somewhat different (business owners rather than illegal immigrants), but even there the debate is gradually shifting away from differences over goals and rather over which party is better suited to administer the Leviathan state.

And since neither party is particularly suited for this (note how both parties seem afflicted by endemic corruption when they are in power), the likely future of American politics is a regular oscillation of power between the two parties without a substantive change in actual polices.

One need only look at how quickly Barack Obama’s administration adopted and defended some of the worst policies of the Bush administration that many of Obama’s supporters presumed they were electing him to dispense with. 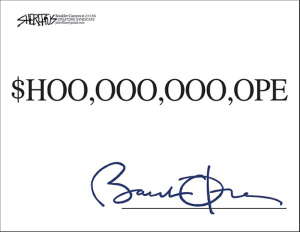 Found this at Geekologie. Lets hope the Associated Press doesn’t sue George Lucas over this. 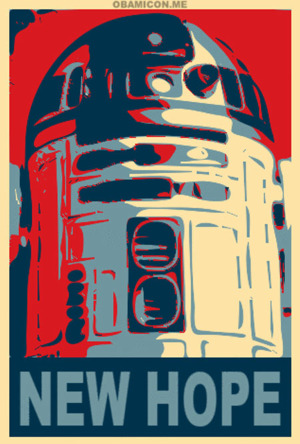 One of the reasons I’ve always liked Stewart Brand is he has a way of cutting through a lot of nonsense and revealing salient points about issues without oversimplifying them. Over at the Long Now Blog, he has a summary — citing engineer Saul Griffith — on what would have to happen in order to make much of a dent in global climate change (emphasis added),

What would it take to level off the carbon dioxide in the atmosphere at 450 parts per million (ppm)? That level supposedly would keep global warming just barely manageable at an increase of 2 degrees Celsius. There still would be massive loss of species, 100 million climate refugees, and other major stresses. The carbon dioxide level right now is 385 ppm, rising fast. Before industrialization it was 296 ppm. America’s leading climatologist, James Hanson, says we must lower the carbon dioxide level to 350 ppm if we want to keep the world we evolved in.

The world currently runs on about 16 terawatts (trillion watts) of energy, most of it burning fossil fuels. To level off at 450 ppm of carbon dioxide, we will have to reduce the fossil fuel burning to 3 terawatts and produce all the rest with renewable energy, and we have to do it in 25 years or it’s too late. Currently about half a terrawatt comes from clean hydropower and one terrawatt from clean nuclear. That leaves 11.5 terawatts to generate from new clean sources.

Meanwhile for individuals, to stay at the world’s energy budget at 16 terawatts, while many of the poorest in the world might raise their standard of living to 2,200 watts, everyone now above that level would have to drop down to it. Griffith determined that most of his energy use was coming from air travel, car travel, and the embodied energy of his stuff, along with his diet. Now he drives the speed limit (no one has passed him in six months), seldom flies, eats meat only once a week, bikes a lot, and buys almost nothing. He’s healthier, eats better, has more time with his family, and the stuff he has he cherishes.

So in summary, in order to reach the optimistic scenario where there is still massive species extinctions and hundreds of millions of climate refugees, we have to lop off 11.5 terawatts of fossil fuel generation and Westerners have to become semi-ascetics . . . and all in 25 years to have any chance of making a serious difference.

That will never happen. Just look at the United States — this is a country where people were freaking how just a few months ago because gasoline prices briefly hovered above $4/gallon. There were a few voices that said “hey, lets retool our entire society to reduce fossil fuel consumption,” but most people I suspect agreed with our soon-to-be President Barack Obama who blasted oil companies for not build more gasoline capacity,

They have been in fat city for a long time. They are not necessarily putting that money into refinery capacity, which could potentially relieve some of the bottlenecks in our gasoline supply. And so that is something we have to go after. I think we can go after the windfall profits of some of these companies.

We should also be investing in new technologies so we can replace the internal combustible engine, which has served us well, but it’s time for us to move on, because we want to get rid of fossil fuels.

That the low gas prices are an enormous disincentive for creation of alternative energy is, of course, far too politicaly sensitive to even brook. And, of course, I don’t think you’ll be hearing a President Obama urging a new American austerity to save the planet (in fact, his stimulus proposal is predicated on getting American consumption back on its pre-recession pace).

If Brand/Griffth’s vision is correct, we would be better off focusing our efforts on ameliorating the effects of global climate change rather than some half-assed attempt to forestall it. There is simply no political will, at least in the United States, for the sorts of changes that would actually be required to achieve the sort of dramatic changes that are really required.