One of the most common early artistics experiences that many of us have is simply putting our non-dominant hand on a piece of paper and drawing around that.

Apparently painted hands and hand stencils are among the most common themes in pre-historical art.

Hand paintings came in two basic varieties: prints or stencils. Either the hands were painted (typically with red, white or black pigment – see Prehistoric Colour Palette for details) and then applied to the rock surface, creating a crude handprint; or the hand was placed on the rock surface and paint pigment was then blown through a hollow tube (bone or reed) in a diffuse cloud over it, leaving a silhouette image of the hand on the rock. Alternatively, the hand might have been stencilled simply by spitting the pigment directly onto it from the mouth, or even by painting around it with a pad/brush dipped in pigment. Prints are usually referred to as “positive handprints”, while the hand silhouettes are known as “negative hand stencils”. Both types of pictograph are especially common in the prehistoric art of the Franco-Calabrian region – where the most significant site is Gargas in southern France whose hand paintings date to about 25,000 BCE – in Australian aboriginal art, in the prehistoric caves of the Americas, and in all inhabited continents. The world’s oldest stencil is part of the Sulawesi Cave art, found recently in Indonesia, dating to (37,900 BCE).

How do archeologists and Paleoanthropologists interpret these hand prints and silhouettes? Are they simply the signature of the cave artist, affirming his work and/or his self-awareness? Was it the cave shaman, imprinting his touch on the cave wall in order to acknowledge and possibly enter the spirit world, in a “sealing” ritual? Since hand pictographs have emerged around the world over a period of some 40,000 years, there are bound to be a multiplicity of meanings and motives for their creation, including the usual explanations of rituals, sacred rites and initiation ceremonies.

One of the interesting things is that a significant number of the hand prints and stencils are missing one or more fingers. The initial explanation for this was that, since these humans lived in harsh environments, that this was likely the result of fingers lost in accidents or through rituals.

That view seems to have fallen out of favor, and there is some fascinating speculation as to why people may have not included some digits.

Perhaps the most mysterious aspect of Palaeolithic hand stencils is that on many examples one or more fingers are missing. Early theories saw this as reflecting fingers that really were missing from their subject’s hands, either through frostbite, accidents during flintkapping, or through ritual mutilation. The former have been rejected: these societies were certainly tailoring sophisticated clothing in order to survive the harsh Ice Age climate and mittens would not be beyond their technological ken, and no flintkapper, however unskilled, would sever an entire finger. Deliberate mutilation, perhaps as part of the rituals that accompanied a rite of passage or as punishment, remains a possibility. In many cases, however, two, three or four fingers are missing from stencils, and the deliberate removal of this number – which would render the hand useless – would be suicidal to small-scale hunter societies in such hostile environments. It seems far more probable that such stencils with attenuated fingers resulted from the deliberate bending back of fingers, which have been created experimentally. In some cases too, little fingers seem to have been deliberately painted over, adding strength to this observation. In such cases unskilled work results in the blurring of finger outlines, although most Palaeolithic examples are sharp, suggesting perhaps a degree of artistic familiarity and resulting skill.

It seems sensible therefore to regard finger attenuation as a form of symbolic communication, and therefore that individual hand stencils could be distinguished and meaning could be read from them. What this meaning was one can only guess: did it reflect individual names or concepts? Was it recording ritual acts? In some cases the stencils were placed in clear association with images of animals – two near life-size dappled horses in the case of Pech Merle – and thus seem to be part of wider symbolic stories. Hunter-gatherer societies operating in the last few centuries have employed hand symbols in which fingers are similarly bent; perhaps it is no coincidence that in such systems animals form a large part of the vocabulary, as hand signals would allow silent communication during the hunt. Perhaps in the Palaeolithic such communication systems extended into the ritual world, a blurring of art and belief in the world of survival. In this sense hand stencils formed some of the earliest known artistic forms of human communication.

I’ve seen this lithographic, “The Great Paralysis,” pop up in a couple of places on the web over the years.

The lithograph is visually striking, but also contains elements commonly associated with antisemitism.

According to an auction site that has occasionally featured Weber’s work, the artist was both antisemitic and anti-Nazi.

I’d really like to find out more information about when this lithograph was created and for what purpose (many of Weber’s works were apparently used as illustrations).

Hot Wheels makes a line of diecast Art Cars that are inspired by famous works of art or art movements, such as this Mondrian-inspired Ford Transit Connect.

Slate had an interesting article back in July 2009 on the problems faced by museums trying to preserve plastic art and artifacts,

The problem of preserving plastics isn’t limited to highbrow art. Not long after The Graduate debuted, manufacturers around the world began to incorporate synthetic polymers into their goods. As plastics revolutionized the making of furniture, toys, health care products, and electronics, museums of industry, design, and medicine began snapping up plastic objects that were either historic (the first artificial heart) or culturally important (Barbie dolls). Plastics hold up well for the decade or so during which a consumer uses most products. But museums, unlike consumers, are in it for the long haul, and when plastics crash, they crash precipitously. As a result, museums of all sorts have been having Gabo moments in the past decade.

The casualty list is appalling: Antique plastic dolls at the National Museum of Denmark have begun to peel and flake; classic furniture at the Victoria & Albert Museum in London might as well have been left out in the sun for years; the first-ever plastic toothbrush, at the Smithsonian, is collapsing into a pile of crumbs; etc. A whole generation of irreplaceable items that are as representative of our culture as pottery or flintheads were of ancient ones are dying—and many people charged with their care have no idea how to stop further damage.

And, for the most part, Slate says there isn’t really much of a solution. Plastics simply don’t last as long as other compounds and there are a whole host of challenges they face, including mold and bacteria that have evolved to eat plastic!

So I guess my action figure collection won’t likely make it to the next century. Maybe the solution will be instead of buying the actual plastic object, buying the plans to replicate it on something like MakerBot and then simply print a new one as the old one begins to degrade. Store data, not atoms. 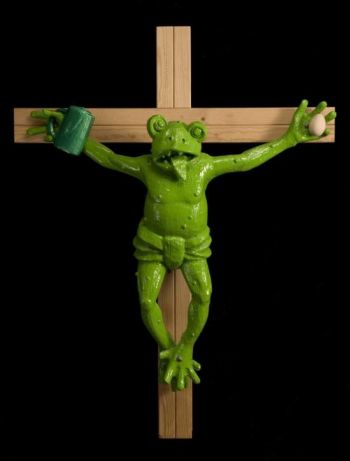 This AFP story on an art museum mishap has to have one of funniest open paragraphs in recent memory,

A giant inflatable dog turd by American artist Paul McCarthy blew away from an exhibition in the garden of a Swiss museum, bringing down a power line and breaking a greenhouse window before it landed again, the museum said Monday.

Well, at least McCarthy is up front about the value of his “art.”