This anti-Vietnam War poster is widely attributed to students at UC Berkeley around 1970.

According to the BBC, at least three metal spheres fell in northern Vietnam in early January,

The largest object weighs about 45kg (99lb) and was found near a stream in Tuyen Quang province, the Thanh Nien News website reports. Another orb landed in local resident’s garden in the neighbouring Yen Bai region, while the lightest, weighing 250g (9oz), came down on a nearby roof before rolling onto the ground, the website says. Local people reported hearing what sounded like thunder in the minutes before the objects were found. 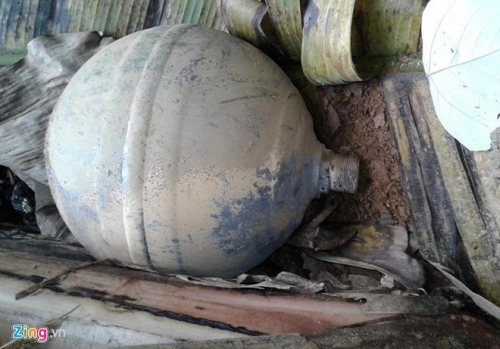 Vietnamese Defense officials have determined the devices were manufactured in Russia and have some sort of use in aerospace,

Initial investigation shows that they are not explosive materials but specialized compressed air tanks of some flying devices, perhaps a launch vehicle.

The objects were produced in Russia. But it is still not known if Russia owns the objects because it is possible that they were manufactured in Russia and then sold to other countries.

In March, the World Society for the Protection of Animals announced that it had reach an agreement with Vietnam to create a task force that would be responsible for managing the phasing out of bear farms in that Asian country.

Although bear farms are already illegal in Vietnam, laws against them have rarely been enforced and the World Society for the Protection of Animals estimates there are about 3,000 bears on such farms.

The bears are raised by farmers to extract their bile which then is used in folk remedies for a wide range of health complaints.

Vietnam has agreed to micro-chip all bears in captivity to monitor farms and gradually close the farms. It will work with the World Society for the Protection of Animals to develop a sanctuary for the bears in Cat Tien National Park.

People for the Ethical Treatment of Animals activist Jason Baker was fined $15 by authorities in Ho Chi Minh City, Vietnam for protesting outside a KFC in that city.

Everyone knows Vietnam is not a place where you demonstrate.

I would do it over again in a heartbeat.

I would encourage him to do so (and maybe the next time he’s there, Baker might want to take note of the appalling human rights problem in Vietnam — or would that be asking too much of a “compassionate” person like Baker?)

What is John Kerry thinking? The Republicans spend the week laying out one charge after another — some fair, others not. To hear the Republicans, Kerry is a flip-flopping Senator who is at heart a leftist peacenik in the Dukakis mould. So what is Kerry’s response? That’s right, he served in Vietnam, and his opponents didn’t,

The vice president even called me unfit for office last night. I guess I’ll leave it up to the voters whether five deferments makes someone more qualified to defend this nation than two tours of duty.

It’s just bizarre to see the extent to which Kerry’s answer to everything is “I served in Vietnam”. Howard Dean almost won the nomination by exposing the holes in Kerry’s Vietnam strategy, but Kerry and/or his campaign seems to have learned nothing from that primary experience.

While it calls for developing nations to open up their markets, the United States this month imposed duties of shrimp from Vietnam and China of 93 percent 112 percent respectively.

The duties will hit Vietnam especially hard as shrimp exports account for two-thirds of that country’s exports and 2 million people are employed in the industry.

The U.S. Commerce Department ruled that the two countries were exporting shrimp to the United States at below market prices. This is the standard dumping claim which the United States has repeatedly used to enact protectionist measures against competitors.

Rather, shrimpers in Vietnam and China tend to fish shrimp on large farms and, of course, labor costs in Vietnam and China are significantly lower than in the United States, allowing those two countries to sell shrimp cheaper. That’s not dumping, that’s comparative advantage. (Ironically, the U.S. shrimp industry complains about use of antibiotics, which is odd since that is an objection other countries frequently offer against U.S. beef and other products).

Even if the dumping claim were true, under the logic of the free trade principles that the United States pushes other countries to adopt, it shouldn’t matter. If China and Vietnam want to sell shrimp below market prices that would be rather foolish of them, but it would be a great boon to American consumers.