As Amy Lee tells Fox News there are a couple of advantages to dressing up as the goofy-looking Katamari dude or the even goofier King of All Cosmos,

People will spend copious amounts of time and money working on a costume, only to have no one recognize what character they’re dressed as. But with ‘Katamari Damacy,’ there’s no way anyone can miss the giant heads and ball of junk, even if you’ve never played the game. Katamari cosplay [costume play] always seems to be a big hit.

Apparently, though, nobody’s been able to figure out a way to create a sticky ball that will roll up elephants and small islands yet. Damn. 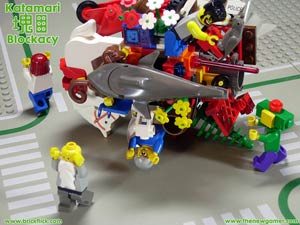 Earlier this month, 18 year old Jacob Robida injured three people with a hatchet and gun at a gay bar in New Bedford, Massachussetts. He then fled to Arkansas where he murdered a law enforcement official and his female companion. He was, thankfully, killed by police officers there (some reports claim he committed suicide).

We cannot ignore what has happened in our community, we must address our situation immediately. All clergy, every church and synagogue in the City of New Bedford, must facilitate a positive, engaging dialogue with our young people and their families. This cycle of violence must stop. The guns have to come off the streets. The violent video games have to be taken out of our homes. Adults and children have to start coming forward with information, we must intervene to stop violence before it occurs.

Of course there was no mention at all of even a tangential video game connection with Robida’s crime spree. Rather, this scumbag preferred more traditional hate materials — his apartment was filled with neo-Nazi literature and posters.

Now if Lang really is consistent in his beliefs he should simply say something like,

We need to amend the U.S. Constitution to allow the banning of literature like James Robida used to fuel his deadly, hateful rampage.

This is, after all, how most European countries deal with racist hate literature (although they tend to inconsistently apply such laws).

Take the guns (and the hatchets–don’t forget to confiscate the hatchets), ban the literature, get the video games, and give everyone lots of hugs and then nutcases like Robida will become model citizens who never bother anyone.