Medieval Death Bot is a Twitter bot with an accompanying Tumblr blog that simply tweets out summaries of deaths from medieval records.

Geoff. Curlevach, died 1298, got up mad & raving drunk, walked into the Soar outside the North gate & by accident fell in & drowned

Henry le Mason, died 1347, dug under a wall in the priory, which fell upon his head and broke it

Perhaps you could use a cloud-based Batman platform that manages every aspect of analyzing…… https://t.co/ellElCRgkg

DownloadTwitterVideo.com will let you enter a URL to a Tweet that features a native Twitter video (for the love of god, why?) and will then give you links to download that video as an MP4 file.

Crazy story at Medium by a woman who was being harassed by anti-vaxxers. The harassers got hold of a photo of the woman’s baby that she had posted online, and began tweeting out copies of the photo.

When she contacted Twitter, they suggested that she file a DMCA takedown notice for the images. For fuck’s sake. That is such bad advice on so many levels, not the least being that DMCA notices are generally going to result in the contact information of the individual or organization filing it to be shared with the person being served the notice.

And that’s what happened. She filed the DMCA notice which led to the image disappearing almost instantly from Twitter, but now the people harassing her were handed her personal contact information.

This is not the first time Twitter has suggested to users that they send DMCA notices to deal with harassing content without providing notice of what doing so entails.

There are so many things that Twitter could do to curtail abuse on its platform, and many of its heavy users have laid out in detail what they’d like to see change. Most of the suggestions by John Scalzi’s What I Want Out of Twitter would significantly dial back the level of abuse that individuals are exposed to:

3. Make mute/block lists native to Twitter and shareable across clients.

6. Muting in Notifications and Direct Messages.

7. The ability to see only replies/notifications from those you follow/whitelist.

8. An optional tab where muted/blocked account replies can go.

Unfortunately, Twitter seems completely uninterested in implementing these sort of suggestions. It seems to see Twitter as solely a link sharing/news service (hence the execrable Moments “feature”) rather than a discussion platform, and doesn’t seem to care about improving its system for those of us who use it for the latter purpose.

Who Tweeted It First is a service that let you search through Twitter’s public archive to determine who first tweeted a particular phrase. 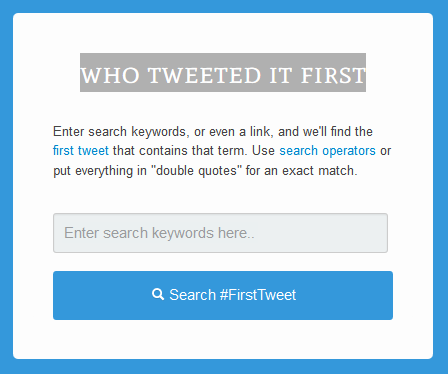 In Australia, television celebrity Charlotte Dawson has recently been hospitalized twice because of suicide attempts that were blamed, in part, on trolls inundating her with abuse on Twitter. Whether or not the trolling was responsible for Dawson’s suicide attempts, Julia Baird argues that something needs to be done about online trolls. Specifically she recommends that users should:

Encourage Twitter to keep a record of those who are blocked for bullying; if a certain number is reached, delete accounts. If persistently savage, violent attacks occur, there should be consequences. There must be a way to punish serial bullies without triggering the possibility of broad censorship.

That, of course, is an awful idea since it would take about 5 seconds for the folks who controls hundreds of thousands of fake Twitter accounts to realize they have a quick way to remove any Twitter account. Instead of preventing bullying behavior, such a simplistic solution would quickly enhance and enable the trolls.

Instead, Twitter seems like one of the few cases where something the like a Real Time Blackhole List could be useful. Twitter already has a Lists feature that allows users to assemble lists of users, typically related to subject categories (top soccer players, famous atheists, etc.)

Why not take that a step further and allow me to turn the people I am blocking into a list that others can subscribe to and, if they wish, in turn block anyone I block.

There are few people whose judgment I’d trust enough to automatically block, but there are some. I’d like to automatically block anyone that my wife and a few trusted friends block. Moreover, once such a feature was implemented, there would certainly be Twitter accounts created to serve as a Real Time Block List for Twitter which users could decide for themselves whether to trust or not.

This would not, of course, eliminate trolls or all abuse on Twitter, but it would have the advantage of being at least as effective as Baird’s solution while still offering a solution that errs on the side of free speech.