The minorship of the human race is nowhere more evident than in the superstitious veneration of everything natural, the acceptance of the supremacy of blind nature over intelligent beings (natural morality). It is not the savages who are in this state of childishness and minority, not young nations, but the ageing ones which do not notice their superstitions and even pride themselves on being free from superstition. This happened in ancient history, it is happening now, and this state of childishness usually begins during the era of a nation’s decline, though the nation believes itself to be at the zenith of its civilisation. The present puerility of Western Europe is a form of paganism, though secularised since the era of the so-called Renaissance. Death is venerated too, as being natural. The fear of death leads to regarding death itself as a liberation from this agonising fear, to writing laudatory hymns and glorifying it.

–Nikolai Fyodorov, The Philosophy of the Common Task, 1915.

Interesting piece from CBS News about a very basic retinal replacement device that provides rudimentary sight to a woman who went blind from retinal disease. The device includes a camera mounted on the glasses that converts what it sees into electrical impulses sent directly to her optical nerve cells.

The drawbacks? The device costs $100k and at the moment only provides a 60 pixel image. That is still a dramatic improvement over being blind, but a long way from fully restoring sight. 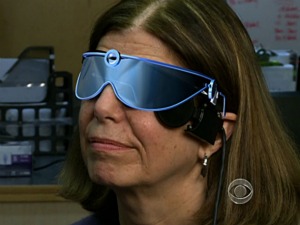 One of the more interesting dilemmas that animal rights critiques poses is exactly what role human beings should play as part of the animal kingdom, specifically when it comes to things like predation. After all, if we suppose that birds have rights, not only does the turkey on a farm have a right not to become my Thanksgiving meal, then so does the bird chirping outside my window have a right not to become the victim of the neighborhood serial killer of the feline persuasion.

Occasionally a variety of this argument is used as an attempted reductio ad absurdum against the case for animal rights — that if one were to take seriously the claims made by animal rights theorists that humans should be out there attempting to prevent lions from preying on zebras and antelope. Taking that to a further extreme, perhaps instead of attempting to preserve endangered carnivore species, human beings should instead allow them to go extinct since this would reduce the total suffering in the world on this view.

Some people, especially in the transhumanist community, take this idea very seriously, however. In September, The New York Times published an op-ed by Rutgers University philosophy professor Jeff McMahan on this very topic. Once you get past the tedious introduction referencing Isaiah and whether or not we would be “playing God” by making wholesale changes in carnivorous species, McMahan gets to the heart of the matter,

That is the central issue raised by whether we ought to try to eliminate carnivorism.  Because the elimination of carnivorism would require the extinction of carnivorous species, or at least their radical genetic alteration, which might be equivalent or tantamount to extinction, it might well be that the losses in value would outweigh any putative gains.  Not only are most or all animal species of some instrumental value, but it is also arguable that all species have intrinsic value.  As Ronald Dworkin has observed, “we tend to treat distinct animal species (though not individual animals) as sacred.  We think it very important, and worth a considerable economic expense, to protect endangered species from destruction.”  When Dworkin says that animal species are sacred, he means that their existence is good in a way that need not be good for anyone; nor is it good in the sense that it would be better if there were more species, so that we would have reason to create new ones if we could.  “Few people,” he notes, “believe the world would be worse if there had always been fewer species of birds, and few would think it important to engineer new bird species if that were possible.  What we believe important is not that there be any particular number of species but that a species that now exists not be extinguished by us.”

Yet the extinction of an animal species is not necessarily bad for its individual members.  (To indulge in science fiction, suppose that a chemical might be introduced into their food supply that would induce sterility but also extend their longevity.)  And the extinction of a carnivorous species could be instrumentally good for all those animals that would otherwise have been its prey.  That simple fact is precisely what prompts the question whether it would be good if carnivorous species were to become extinct.

Here, then, is where matters stand thus far.  It would be good to prevent the vast suffering and countless violent deaths caused by predation.  There is therefore one reason to think that it would be instrumentally good if  predatory animal species were to become extinct and be replaced by new herbivorous species, provided that this could occur without ecological upheaval involving more harm than would be prevented by the end of predation.  The claim that existing animal species are sacred or irreplaceable is subverted by the moral irrelevance of the criteria for individuating animal species.  I am therefore inclined to embrace the heretical conclusion that we have reason to desire the extinction of all carnivorous species, and I await the usual fate of heretics when this article is opened to comment.

Transhumanists who go down this road typically posit altering the DNA of carnivores and omnivores so that they no longer need/desire the flesh of other animals (which McMahan does mention), or producing meat  in a non-cruel way (for example, growing it in a vat and then distributing it somehow).

An alternative that McMahan seems to ignore might be modifying prey species so that they no longer suffer when they are killed by predators which would allow predation to continue without reducing the number of species or radically changing the ecosystem in other ways.

It is also curious that McMahan and others tend to stop there. After all, predation is not the only cause of suffering in the animal kingdom. For example, in 2009 a 39-year-old chimpanzee kept in captivity at a zoo in Oregon died from what is believed to have been either a heart attack or stroke. Presumably, either way the chimpanzee’s death involved quite a bit of suffering.

Wired Science and Singularity Hub both covered the recent publication in Nature of a study demonstrating curing color blindness in monkeys using gene therapy that allowed two squirrel monkeys to produce a protein that allowed them to see reds and greens.

At first, the two monkeys behaved no differently than before. Though quick to earn a grape juice reward by picking out blue and yellow dots from a background of gray dots on a computer screen, they banged the screen randomly when presented with green or red dots.

But after five months, something clicked. The monkeys picked out red and green, again and again. At the biological level, Neitz can’t say precisely what happened — the monkeys, named Sam and Dalton, are alive and healthy, their brains unscanned and undissected — but their actions left no doubt.

[Jay] Neitz thinks the monkeys’ brains didn’t grow new neural circuits. “That’s the way we were thinking about neural plasticity before,” he said. Instead, their brains may have reconfigured themselves, “learning how to use the same old circuits in a new way when the information coming over the lines changed.”

And, of course, once you start talking about curing genetic defects, the possibility of creating genetic enhancements is ultimately on the table as well.

[David] Williams, however, was quicker to speculate. “Ultimately we might be able to do all kinds of interesting manipulations of the retina,” he said. “Not only might we be able to cure disease, but we might engineer eyes with remarkable capabilities. You can imagine conferring enhanced night vision in normal eyes, or engineering genes that make photopigments with spectral properties for whatever you want your eye to see.”

“This study makes that kind of science fiction future a distinct possibility, as opposed to a fantasy,” continued Williams.

No word on the possibility of x-ray or heat vision.