Nice Jesus and Mo comic, responding to The Pope’s criticism of how secularized Christmas has become. 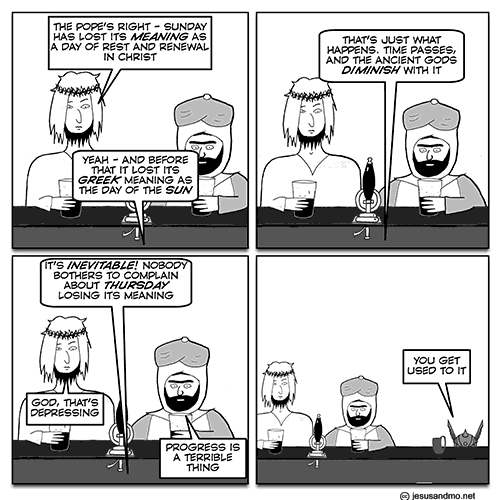 Any trend to produce programs and products — including animated films and video games — which in the name of entertainment exalt violence and portray antisocial behavior or the trivialization of human sexuality is a perversion, all the more repulsive when these programs are directed at children and adolescents.

It would be interesting to compare the damage wreaked by violent video games compared to the damage done by the Church’s public campaign against the use of condoms to prevent the spread of AIDS and other sexually transmitted diseases (physician Marcela Aslan does an http://www.catholic.org/international/international_story.php?id=19561“>excellent job of chronicling the very real human suffering caused by the Church’s campaign against condoms in Africa).

Compared to the Church’s anti-condom activism, the sins of the videogame and film industry seems positively venial.