It is 2010, and a) Sonos‘ expensive but cool networked music solution still has a 65,000 track limit, and b) reviewers of Sonos products almost universally fail to mention that limit either because they don’t know about it or think it is an unimportant detail.

Ah, yes, I was just asking myself the other day “how come I can’t buy any Marvel character-branded headphones for my iPod?” Well, now (or very soon) I can! Spider-Man earbuds, earpad headphones, traditional headphones, and wraparound headphones.

But wait … where’s the Spider-Man bluetooth headset? Come on, guys, lets get with the program here. 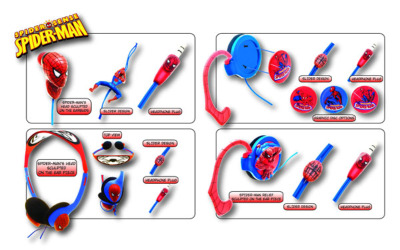 By now the scandal surrounding the late English pianist Joyce Hatto is all over the net, but the fascinating thing to me is not the role that technology played in exposing the Hatto hoax but rather the obscurantist fetish of so many music critics.

Hatto died in June 2006, and had been heralded by many critics, including those at Gramophone. Part of the appeal of Hatto for critics was that her recordings were so hard to obtain; released on a very small label, finding Hatto’s CDs was apparently fairly difficult. If you enjoyed Hatto, you were by definition in a small elite who had actually been able to find one of her CDs. As Gramophone noted in its mea culpa article,

To love Hatto recordings was to be in the know, a true piano aficionado who didn’t need the hype of a major label’s marketing spend to recognise a good, a great, thing when they heard it.

Of course it turns out that the reason Hatto was so accomplished on such a diverse body of work was that very few, if any, of the recordings sold under her name were actually her music. Rather, they were other people’s performances with occasional small tricks like slight compression of the music to try to fool those who might compare the Hatto recording with the original.

The hoax was finally undone when a Gramophone critic went to play CD of Hatto playing Liszt and noticed that his computer’s music player identified it as another pianists recording of Liszt. The critic then compared the two and noticed that Hatto’s recording was identical to the other artists, and soon it became apparent that pretty much everything recorded under Hatto’s name was, in fact, someone else’s music.

Ugh. Being bored and sick last night, I figured what the heck — I’d tune into the end of the Grammy awards to see Eminem perform with Elton John. A lot of people I know were upset at the idea that Eminem might win the award for best album. My response to that worry was that there’s only one thing you ever have to know about the Grammy awards — these folks once awarded Milli Vanilli a Best New Artist award. ‘Nuff said.

Anyway, before Eminem performed Recording Academy President and CEO Michael Greene came out and gave a brief little sermon about how art always shocks, our parents hated Elvis, blah, blah, blah. I almost expected him to add that if Shakespeare were alive today he’d be writing lyrics like contemporary rap stars. Among other things, Greene said,

People are mad, and people are talking. And that’s a good thing because it’s through dialogue and debate that social discovery can occur.

Listen, music has always been the voice of rebellion — it’s a mirror of our culture, sometimes reflecting a dark and disturbing underbelly obscured from the view of most people of privilege, a militarized zone which is chronicled by the CNN of the inner city — rap and hip-hop music. We can’t edit out the art that makes us uncomfortable. That’s what our parents tried to do to Elvis, the Stones and the Beatles.

…Accept the fact that musicians, movie stars and athletes are not perfect, they make mistakes and can’t always be counted on to be role models. Art incites, entices, it awes, and angers, it takes all its various incarnations to maintain the balance, vitality and authenticity of the artistic process. Let’s not forget that sometimes it takes tolerance to teach tolerance.

What an absurd claim about art. Certainly no government official should prevent Eminem from making his music or stop Hollywood from making films in which the brains of a living human being are eaten (as is done in the movie Hannibal), but to say that essentially anything constitutes art is simply wrong.

Do we really need people like Eminem to provoke discussion? I think not. Under this sort of definition, Fred Phelps is a performance artist rather than a hateful bigot. I’m waiting for one of these Hollywood liberals to defend cross burning as artistic expression.

I think The Onion best caught the absurdity of such rhetoric with its classic story, ACLU Defends Nazis’ Right to Burn Down ACLU Headquarters. In a free society we shouldn’t look to the state to censor distasteful works, but neither should we expect that cultural elites will embrace as art anything that sells millions of copies simply by appealing to the lowest common denominator.