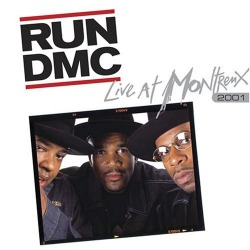 In 12 years of blogging, this might be my first album review. Anyway, so one day I’m jogging around the track when Last.Fm randomly decides to play me a live version of Run DMC’s “King of Rock” rather than the studio version. Holy shit.

I don’t care what anyone says, you listen to Run DMC Live at Montreux 2001 and this is still some of the best hip hop/rap ever recorded and it’s just slamming live. The only real low point of this joint is that “Rock Box” only appears as part of a mid-set medley, and DMC’s voice problems are also noticeable.

Still, this is one of the few albums I’ve actually went and purchased on an impulse in more years than I can remember (took me awhile to figure out just how to purchase music). Can’t recommend this enough.