The Republican Party may want to ditch its plank on assisted suicide given how quickly it seems to be destroying itself. For example, I would think that at this point given he has zero chance of ever seriously contending for president again, that John McCain might want to give the nation some straight talk and admit he made a serious error picking Alaska Governor Sarah Palin as his running mate last year. Instead, he’s trumpeting her as playing some post-resignation leadership role in the GOP,

“I have the greatest respect and affection for Sarah, Todd, and their family. I was deeply honored to have her as my running mate and believe she will continue to play an important leadership role in the Republican Party and our nation,” McCain said in a statement e-mailed to Reuters.

Palin’s continued popularity with a segment of Republican voters is obvious, but if she gains traction it is also a clear path to permanent minority status for the Republican Party. It is going to have a hard enough time overcoming its past reliance on the increasingly irrelevant Religious Right. Throw in a glorification of Bush-league stupidity and mismanagement, and its all over.

Before I get into my main point, let me make it clear that I think both major party candidates for President this year are about as qualified for the office as my cat. Both John McCain and Barack Obama have repeatedly demonstrated they are more than willing to sell out personal liberty as long as it will get them the votes needed to take office. Since the current administration decided to push the pedal to the floor in accelerating the consolidation of power in the executive, the future under either of these yahoos (or the respective morons each chose as a running mate) is dismal at best.

Okay, with that out of the way, it is hilarious to watch “conservatives” like Andrew McCarthy bemoan the possibility of a “socialist” Barack Obama bringing on “the death of freedom”. It’s not that I disagree with his analysis on Obama, it is that I don’t see how this is a substantive change from the current administration which McCarthy has routinely sold his principles to defend.

On the socialism angle, fine Obama’s a socialist. In a country where the “conservative” president pushes a ridiculous $700+ billion bailout deal, however, who in the major party duopoly isn’t? The difference is at best one of a small degree in details rather than any bedrock principle. McCain and Obama may disagree on specifics, but both stand steadfastly for the continued expansion of federal intervention in the economy. In fact, as was clearly the case with Bush, I’d argue that McCain is far more dangerous on that point because Republicans will fall in almost lockstep behind the creeping “conservative” socialism with little protest (imagine if this were Al Gore’s second term and he was proposing such massive intervention in the market? Then the Republican slugs might actually grow spines).

All the “death of freedom” nonsense against Obama is hard to understand from Republicans who have stood by and excused the use of torture on terror suspects; the ridiculous security theater at airports and elsewhere that instills fear and violates our rights while doing nothing to protect us from terrorist attack; the wholesale re-creation of insidious domestic intelligence operations. And these folks then presume to lecture us that freedom may not survive and Obama administration unscathed?

Frankly it is hard to understand the vehemence with which Democrats and Republicans support their particular presidential candidate or oppose the other party’s selection. Both fundamentally stand for using the power of their office to punish and persecute those whom they deem unworthy — the only point they ever seem to disagree is in the detail of who precisely the victims will be.

Ah, yes, American elections — nothing but year ’round special pleading.

Politico carried an interesting analysis of an AP-Yahoo news poll which is one of the examples of why I’m so ambivalent about voting,

More than a third of all white Democrats and independents — voters Obama can’t win the White House without — agreed with at least one negative adjective about blacks, according to the survey, and they are significantly less likely to vote for [Barack] Obama than those who don’t have such views.

Ah yes . . . even bigots get to vote. Of course that’s hardly the only irrational views held by those who will determine the next leader of the free world. Depending on the poll, 40 to 50 percent of Americans believe God created the world in just 6 days — and presumably, those people also go to the polls to vote.

Which is not to say that I have any particular sympathy for Obama (or McCain for that matter) knowing that people who hold irrational views hold the futures of the candidate in their hand. After all, both of the candidates not only hold irrational views but go further and espouse views they clearly do not personally believe in but nonetheless feel they have to make public displays of fealty in order to curry favor with this or that cross-section of voters.

I see ads about the importance of voting, civic duty, the ideals of democracy, blah blah blah, but our presidential elections have always struck me as more like episodes of mass delusion and hysteria that rock the country every four years. Modern political campaigns are simply social versions of ergot poisoning that induce hallucination and madness in true believers. 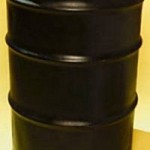 I was going to write a gratuitous slam on Pray At The Pump’s efforts to pray for lower gasoline prices in the United States. Then I realized that Pray at the Pump’s understanding of how oil markets work is no less irrational than either John McCain or Barack Obama’s apparent understanding of oil markets, so what’s the point?

It’s really sad — but so typical — to see the US election boil down to a battle of The Moron vs. The Messiah.

I was trying to explain to someone the other day why I don’t vote. But this picture pretty much sums up the uselessness of doing so. 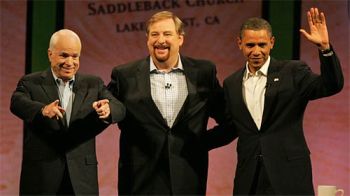 Rick Warren believes that the Bible is inerrant; that evolution is wrong (Genesis is all you need); that homosexuality is a sin and gay marriage is “non-negotiable” for Christians; that abortion, stem cell research and cloning should all be crimes. He also spends a lot of time and money on projects in the Third World that look nice on paper, but otherwise don’t accomplish anything.

And both national parties decided to elevate this walking ignoramus to a national an arbiter of opinion in the election for the leader of the free world. Oy.