With the latest Indiana Jones film featuring crystal skulls as the artifact that Indy must risk life and limb to recover, there are plenty of articles showing up in The Smithsonian, Archeology, and other magazines on the history of the real crystal skulls. All go something like this — in the 19th century crystal skulls began appearing in Europe that were claimed to be artifacts taken from religious sites in the New World. In fact, close inspection of the skulls shows they were created sometime in the 19th century using Old World tools. In a word, they’re fakes.

Except . . . none of the stories addresses the crystal skulls recovered in 1992 from a 1757 shipwreck that had left from the New World headed to Spain. That particular wreck is notable because it recovered the Queen Isabella Emerald among other finds.

That would a number of possibilities from genuine New World crystal skulls to a forgery created on this side of the Atlantic to possibly someone planting a later artifact at an older treasure site.

Assuming that treasure find was legitimate. Certainly Victor Benilous received a good deal of press coverage in Time, USA Today and other outlets at the time his Archaeological Discoveries Venture Inc reported recovering the Queen Isabella Emerald and other treasures from the 1757 shipwreck. But consider how Diane Morgan reports on the find in her 2007 book From Satan’s Crown to the Holy Grail: Emeralds in Myth, Magic and Legend (emphasis added),

Victor Benilous, president of Archaeological Discoveries, Inc., also a restaurateur and founder of a theological seminary in West Palm Beach, claims he found the Emerald of Judgment (which he calls the “Isabella Emerald”) as well as Cortez’s signet ring in 1993 in a 1757 shipwreck.

To find the wreck, Benilous and his wife enlisted the help of a couple of psychics, a side-scan sonar, and a bottom profiler. They identified three anchors of of the Spanish Colonial period about 12 miles off the cost of Florida between Cape Canaveral and Sebastian Island. They found a crystal skull, and soon the rest of the treasure. According to Benilous, wreckage divers also found up to 50,000 carats of cut emeralds, a million carats of uncut emeralds, an Aztec-carved crystal, gold ornaments, a massive uncut emerald crystal weight 25,644 carats. Benilous claims that his “Isabella Emerald” could be worth more than $20 million, but he is not saying where it is now. You can buy an exact replica of the signet, if you like, from the A.D. Ventures online store.

Certainly that added information makes the claim about the crystal skull and other items allegedly retrieved from a 1757 shipwreck seem fishy at best. Certainly it would be interesting to find out a) where the crystal skull he allegedly recovered is currently and b) whether or not is has ever been subject to any scientific scrutiny to determine how and when it was likely created.

Hasbro may have just went too far this time with its latest genre themed Mr. Potato Head, Taters of the Lost Ark. 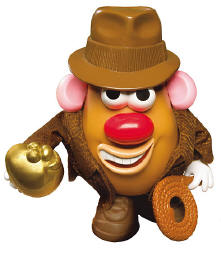 McSweeney’s asks (and answers) what would happen if Indiana Jones applied for a university position in anthropology,

The committee concurred that Dr. Jones does seem to possess a nearly superhuman breadth of linguistic knowledge and an uncanny familiarity with the history and material culture of the occult. However, his understanding and practice of archaeology gave the committee the greatest cause for alarm. Criticisms of Dr. Jones ranged from “possessing a perceptible methodological deficiency” to “practicing archaeology with a complete lack of, disregard for, and colossal ignorance of current methodology, theory, and ethics” to “unabashed grave-robbing.” Given such appraisals, perhaps it isn’t surprising to learn that several Central and South American countries recently assembled to enact legislation aimed at permanently prohibiting his entry.

Moreover, no one on the committee can identify who or what instilled Dr. Jones with the belief that an archaeologist’s tool kit should consist solely of a bullwhip and a revolver.