In the late 1990s, Franklin Mint sold a set of Marvel-licensed pocket knives.

Somehow I missed this particular publicity stunt for that awful Fantastic Four: Rise of the Silver Surfer movie. 20th Century Fox paid the Franklin Mint to take 40,000 quarters and change the back to feature an image of the Silver Surfer and the URL to the movie’s web site. Then they put the coins back into circulation.

Apparently the Treasury Department was not pleased but ultimately did not prosecute.

If only 20th Century Fox had been creative in making Rise of the Silver Surfer as it was in coming up with promos for the film. 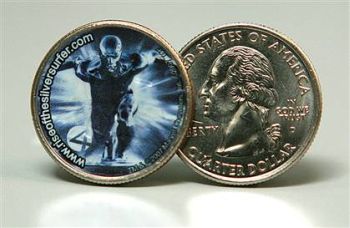