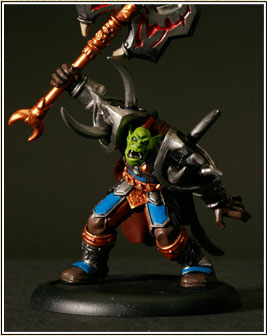 Although my action figure collecting has grown out of hand in recent months, one of the things I did manage to wean myself off of was collecting WizKids’ HeroClix. Not that I don’t have a few hundred neatly stacked in plastic compartments, but I gave up buying anymore a long time ago largely because I never found the time to play.

And just when I thought it was safe to go back into the water, WizKids announces HorrorClix,

“HorrorClix places players firmly in the action, suspense and excitement of a horror movie,” said Jordan Weisman, WizKids CEO. “Players assemble teams of monsters from across the horror spectrum — including vampires, zombies and werewolves — and then protect the innocent, eat them or both in a delightful, gore-filled romp!” HorrorClix uses plot twist cards, a heavy emphasis on scenario play and new character cards to explode the boundaries of CMGs and the patented Clix system.

HorrorClix raises the bar for all miniatures games by shifting the game focus from hack-and-slash combat to inventive scenario- and story-based play. Additionally, it uses the combat dial to provide literally hundreds of tailor-made supernatural (and super-gruesome!) powers and abilities. Character cards flesh out each monster with fiction and detailed explanations of each creature’s capabilities, including mechanics never before seen in miniatures games!

That’s just not fair. Must. Have. Zombie. Army.