Not something I’m actually going to buy, but it does make me sleep easier at night knowing that this exists. Now, where’s my Maskatron toy? 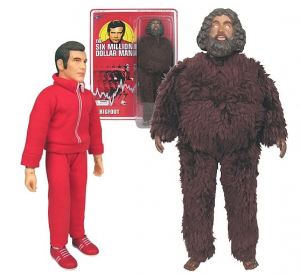 Not to beat up on Boing! Boing!, but what the heck . . . I can’t be the only one who sometimes sees a lot of dissonance between the folks who post on Boing! Boing! For example, Cory Doctorow goes off on global warming “denialists”. Fair enough. I used to be fairly skeptical of global climate change, but I agree that the evidence at this point is so overwhelming for human-induced warming, that the only real debate now is over what, if anything, we’re going to do it about it rather than whether or not the phenomenon is real.

But a week later, David Pescovitz posts a ridiculous fund-raising plea for Loren Coleman’s International Cryptozoology Museum. Now I’m not quite sure on the one hand why Boing! Boing! would want to excoriate global warming skeptics on the hand, and then on the other turn around and help raise money for someone who spends his time on such scientific projects as The Mothman Death List.

Some of the commens in the Coleman thread made the absurd claim that since there have been “living fossils” found like the coelacanth, that cryptozoology is legitimate science. The problem, of course, is that the coelacanth and similar finds have been announced and described by working professional scientists while the cryptozoologists were wasting their time looking for Bigfoot (Pescovitz’s pet obsession) or the Loch Ness monster.

Again, I realize the folks who post at Boing! Boing! have different interests and agendas, but it is a little odd to see Doctorow post about the idiocy of pseudoscience, only to see that followed up by a post urging fund raising for pseudoscience.