The exchange below between Boing! Boing! moderator Antinous and a couple of readers had me laughing out loud. SedanChair pointed out an alleged inconsistency in Boing! Boing!’s approach to intellectual property, claiming the site tends to be IP minimalists when it comes to things like books or music, but acting like IP maximalists when it comes to things like genetic information in the case of the HeLa cell line. 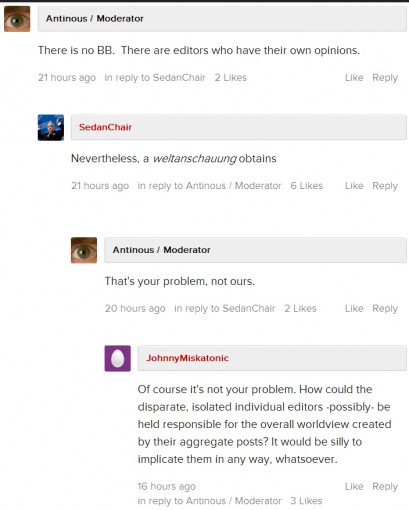 Antinous, one of the moderators of the comment threads over at Boing! Boing! has finally surpassed Teresa Nielsen Hayden in his moderation skills. I am in awe after running across an exchange between Antinous and a user going by the handle “Harveyboing.”

Harvey found this a bit hypocritical and the following exchange ensued,

“Bush is the weird pale kid who lives with his grandmother, eats liverwurst sandwiches for lunch every day, and that no one pays any attention to at all”

“bush is one of the shittiest leaders we ever had”

But, asking for a break, and making a factual statement about the pro-left bias in this particular CNN report, and I get disemvoweled?

If you haven’t figured it out yet, I doubt that you ever will.

Antinous is right, some of us will never get it. And, frankly, I hope I never become the sort of person who does.