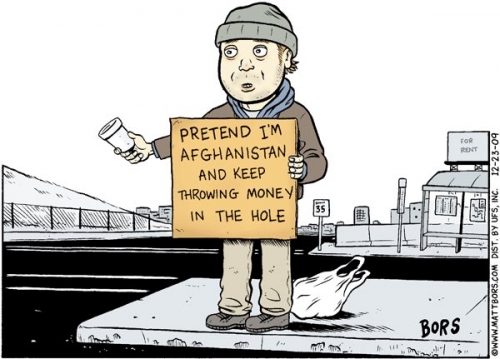 All those dead Taliban fighters are probably going to be spinning in their graves with stuff like this happening in Afghanistan,

The [voter registration] process started last December and, so far, around 22 percent of the 320,770 Afghans who signed up to vote are women. Up to 10 million people are estimated to be eligible to register to vote in the country.

That, and Kabul Television recently broadcast the first images of a woman singing in more than 12 years

Nigerian citizen Osfatu Bose Oweiye was sentenced to death in Pakistan in May after being convicted of heading up a heroin smuggling ring in that country.

Oweiye was arrested in 1999 in connection with a drug bust that turned up 20 kilograms of heroin in a Lahore hotel room. Pakistan’s Anti-Narcotics Force argued that Oweiye headed up a drug-trafficking ring that included at least five other individuals.

The heroin was going to be smuggled out of Pakistan and sold in other countries. Since the fall of the Taliban in Afghanistan, poppy production in that country has exploded, making it lucrative once again to smuggle heroin through Pakistan for distribution elsewhere in the world.

The U.S. Centers for Disease Control and Prevention reported in April that cases of polio worldwide increased four-fold in 2002 due largely to an outbreak of the disease in India.

In 2001 there were only 483 confirmed cases of polio which shot up to 1,920 confirmed cases in polio after an outbreak in the Indian states of Uttar Pradesh and Bihar. That was the single worst outbreak of the disease since the World Health Organization began its campaign to eradicate polio in 1988. Cases from the Indian outbreak constituted 71 percent of all polio cases in 2002.

What a difference a couple of years and a war makes. Under the Taliban, women in Afghanistan could not work outside the home and the Internet was banned because of all the immoral content it carried. Now, women in Afghanistan are training in computer networking to help kick start Afghanistan’s information technology industry.

Reuters ran a story in April noting that of the 17 people who graduated from Kabul University’s first certificate program in networking skills, 6 were women. Reuters quoted 18-year-old Nabila Akbari saying, “My personal goal is to share this knowledge with other Afghans, especially Afghan women.”

Rita Dorani, 23, another graduate of the certification program added,

My message for all Afghan women is to try as much as possible to learn about computers, because it is essential for every man and woman to be aware of this global technology. Men should allow women to learn this technology.

No, the U.S./Northern Alliance war in Afghanistan did not turn the country into a democratic paradise overnight where women have the same sort of rights they enjoy in the West — in fact, as Reuters notes, some rural areas of Afghanistan have reimposed Taliban-style limitations on women. But even with that in mind, there’s still no doubt Afghanistan is a much brighter place for women today than it was prior to the U.S.-led overthrow of the Taliban.

Immediately after the 9/11 attacks, a group called the Revolutionary Association of the Women of Afghanistan (RAWA) received a lot of media coverage. With its rhetoric about freeing Afghanistan’s women from oppression, its smuggled videotapes of atrocities against women, and the imprimatur of Western feminists, RAWA was the perfect group for the media to contrast with the misogynistic Taliban. But along the way there were some voices of caution about RAWA which culminated in an article earlier this month in The American Prospect which raised some disturbing questions about RAWA.

Wendy McElroy first raised concerns about RAWA back on October 23, 2001 when she questioned what was happening to money that the Feminist Majority Foundation and others were raising and giving to RAWA.

Noting that RAWA had clearly done some very good things, McElroy nonetheless questioned the wisdom of involvement with a group that had appeared to have close ties with Pakistan’s Communist Party. Moreover, the group had almost no accountability with only a P.O. box in Pakistan as an address and the routine use of false names in interviews. McElroy conceded that some secrecy was warranted due to fear of retaliation by the Taliban, but most groups like RAWA at least have some sort of open political structure (even terrorist groups generally have some sort of open, above ground representatives) and urged RAWA to pursue openness.

RAWA did not take that advice. And then on April 20, 2002 a very odd thing happened. As well-chronicled by The American Prospect’s Noy Thrupkaew, on that date Elizabeth Miller, a U.S.-based supporter of RAWA, posted a letter attacking Ms. magazine on a listserv run by RAWA. Ms. had run a special insert on the Feminist Majority Foundation’s Afghanistan campaign which profiled women working at the United Nations and a number of other similar “behind the scenes”-style looks, but failed to mention RAWA. For this, it was attacked as being a “mouthpiece of hegemonic, U.S.-centric, ego driven, corporate feminism.”

The letter also attacked Sima Sama, who was at the time Afghanistan’s interim minister of women’s affairs. Miller claimed that Samar “was a member of the leadership of one of the most notorious fundamentalist factions Hezb-e Wahdat.” As Thrupkaew puts it,

Some probing, however, finds little evidence that Samar has anything to do with Hezb-e Wahdat. Rather, what comes to light is a pattern of RAWA-led smear campaigns against other Afghan women who rise to prominence.

In The American Prospect article, Thrupkaew documents a persistent habit of RAWA attacking Afghan women with absurd charges. In each case the real crime committed by the women is that they have risen to a prominence that RAWA apparently feels threatened by.

The Feminist Majority Foundation comes across as genuinely shocked by RAWA’s reckless charges. FMF’s Jennifer Jackman lamely tells Thrupkaew that FMF did refute the attacks, but did not do so publicly. Which, of course, gives the impression to the casual observer that FMF does not disagree with RAWA’s absurd charge.

Which takes us back to McElroy’s earlier comments on the group’s links to Pakistan’s Communist movement. Because, of course, we have seen RAWA-style tactics before. In fact, reading through the back and forth petty feuds and accusations is like reading some old account of internal conflict at a gathering of Trotskyists.

Thrupkaew notes that RAWA’s behavior has fueled rumors that the group is really controlled by a group of men who are Maoists or Communists, and certainly their behavior is exactly the sort of rigid thinking characterized by such groups.

Either way, the Feminist Majority Foundation should be ashamed of itself for keeping its refutation of RAWA’s attacks “within the family.” It is interesting that the FMF emphasizes the fact that it does not gloss over the Northern Alliance’s failings, but it is apparently more than willing to do so when it comes to the highly questionable actions of an Afghan feminist group. When Eleanor Smeal finally wakes up and realizes there’s something wrong with that sort of double standard, we’ll actually be getting somewhere.