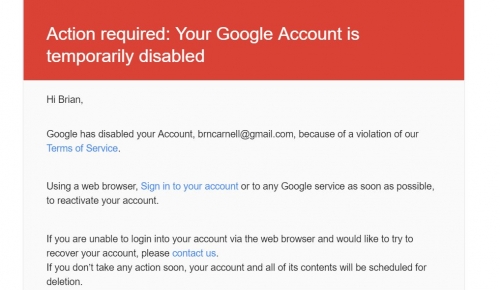 This was extremely concerning. I use Google services for a wide variety of services. While I regularly back up all my content from Google, if the company ever shut off my account it would cause a serious disruption in my life for a few weeks.

I followed the instructions and was able to access my account after logging in via the web using my two-factor authentication.

The strange thing, however, was that I had no idea what Google was referring to when they said my account had been disabled “because of a violation of our Terms of Service.”

I checked to make sure no one but myself had logged into my account, and there was no record of any access other than IP addresses that I use. As far as I know, none of the content I was storing on Google Drive or YouTube was in violation of any of Google’s TOSes.

I sent several emails to Google support and online trying to get an answer to what specifically  had trigger this action, but of course I never received any response. I assume that this was triggered by some sort of algorithm, and a couple of Google (!) searches shows that I’m hardly the first person to be hit with this sort of enigmatic warning and account disabling.

Google needs to be much more transparent about why it flags or disables accounts like this. Once I recovered my account, it should have given me a summary of exactly what triggered its algorithm.

As it is, in the months since then, I have curtailed some of my uses of Google products. Even though none of the contents on it were in violation of the TOS as far as I can tell, I removed almost all of the files I was syncing in Drive and switched over to Dropbox for file syncing.

If you’re a celebrity or academic, you can probably garner enough publicity to get your account restored if Google removes it. But it is disturbing that Google would simply disable an account that I use to organize my life and job and then refuse to respond or explain its actions. Someday you could wake up and find that Google has simply deleted your account with absolutely zero recourse available.