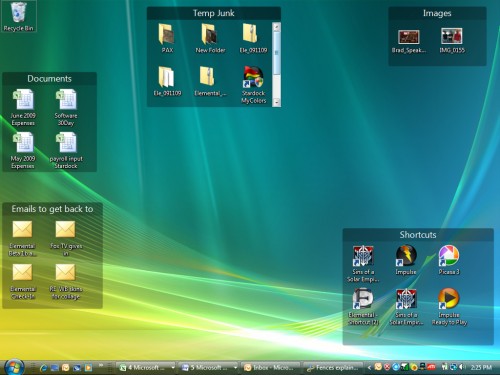 Fences is a Desktop-organizing tool for Windows whose main drawback is that is published by Stardock (yes, that Stardock).

But if you can get past that, Fences adds a couple of helpful additions to the Windows desktop for just $9.99.

Fences adds a multi-page Desktop setup to Windows. Grab the edge of the screen with your mouse and drag to the left or right, and you’re onto the next screen.

All interesting and helpful stuff, but I never would have paid the $9.99 for Fences if it weren’t for the final feature which, after I used it, I couldn’t believe wasn’t already a feature in Windows.

With Fences running, and the option selected, you can double-click on any blank space on the Desktop and all the icons disappear. Double-click again and they reappear.

I know it’s a fairly minor feature, but I can’t help it–I absolutely love it. It just has that “this is how the Desktop should have always worked”  feel to it.