Hmmm…Factory Entertainment is set to release a replica of the signet-style ring that first appeared in 1944’s House of Frankenstein (where John Carradine played the Dracula role) and was later worn by Dracula actors in Universal and Hammer films.

This replica is based on the original prop ring Forest Ackerman acquired and famously wore. There has been some debate over the provenance of that ring, but it seems pretty clear it was almost certainly worn by Bela Lugosi in Abbott and Costello Meet Frankenstein, and probably also by John Carradine in the two Universal movies he did as Dracula. That ring sold for $46,000 at auction in 2009 after Ackerman’s death.

The replica ring will be available in two editions — a collector’s edition for about $49.99 and an “elite” edition made from sterling silver and semi-precious stone for about $199.99. This is supposed to be available sometime in November 2010. 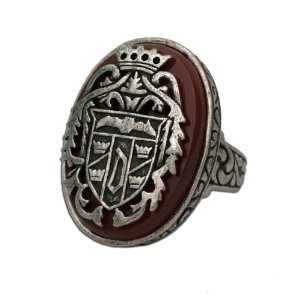