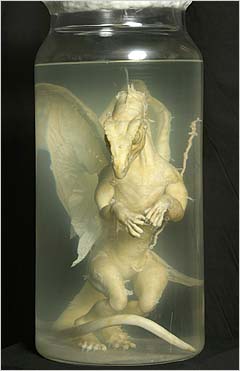 A number of people have sent me links to pictures of the newly discovered baby dragon. There’s some speculation this might have been an attempted hoax by 19th century German scientists trying to pull the legs of British researchers.

If that’s true, that’s really going to piss of Rob Bowman. Despite spending $115 million on his-lame assed movie, he still gets outdone by 19th century Germans who produce a dragon that looks far more realistic than anything that appeared in “Reign of Fire” (and, somehow, the plot and dialogue was several order of magnitude worse than the special effects — one of the worst big budget movies ever).