I don’t think anyone can complain if they get a chance to draw a witch using haunted eggs to turn sailors into donkeys or a possessed cow wearing underwear on its head. This is a dark chapter in history when you think about it, but I wanted to highlight the strangeness and absurdity of it all. I really hoped to make this thick treatise into something entertaining that might inspire people to learn a little more about this insane bit of our past.

Despite the nonsense in between its covers, the Malleus Maleficarum  went through numerous editions in the 15th and 16th centuries thanks to the then-new technological innovation of the printing press. 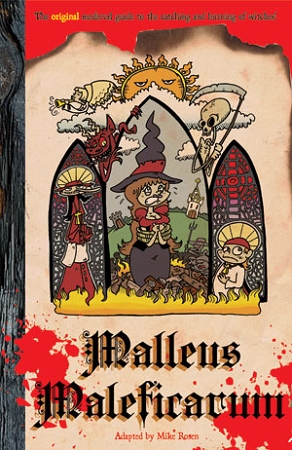 Human Rights Watch has a disturbing report about witch hunts in Saudi Arabia where witchcraft is still a crime punishable by death. And since Saudi Arabia also lacks a penal code, what constitutes witchcraft and what evidence can be used to demonstrate that someone has practiced witchcraft is entirely up to individual judges.

In one of the cases Human Rights Watch mentions, Lebanese television psychic Ali Sabat was arrested in Saudi Arabia while making a pilgrimage to Mecca for the Hajj.

Religious police arrested Ali Sabat in his hotel room in Medina on May 7, 2008, where he was on pilgrimage before returning to his native Lebanon. Before his arrest, Sabat frequently gave advice on general life questions and predictions about the future on the Lebanese satellite television station Sheherazade, according to the Lebanese newspaper Al-Akhbar and the French newspaper Le Monde. These appearances are said to be the only evidence against Sabat.

Sabat was sentenced to death in November 2009, and is not the only person awaiting execution for witchcraft in Saudi Arabia. In 2006, a Saudi judge sentenced Fawza Falih to death for practicing witchcraft and she is still being held awaiting the carrying out of the death sentence.

Obviously bringing international attention to these cases may force the Saudi Arabian government to think twice about actually going forward with the executions, but it has no compunction against carrying out such sentences. According to Human Rights Watch, in 2007 it executed Egyptian pharmacist Mustafa Ibrahim for the crime of sorcery.

Here’s a disturbing story from the BBC back a the end of October. In India, three people accused of being witches killed themselves after being publicly humiliated in their village in the eastern Indian state of Bihar.

Local police told the BBC that one of the three family members, a 60-year-old woman, Kari Devi, had been the subject of attacks for a year.

Last week a group attacked her, her husband and daughter-in-law.

The two women had their hair cut off before the three were forced to eat human waste, the AFP news agency reports.

Villagers had said the three were responsible for the death a local person they had cast spells on.

On Thursday, the three all took poison and died, the police say.

Apparently such attacks are all too frequent in eastern India, with the BBC noting that in the Indian state of Jharkhand in July a mob burned to death two women accused of witchcraft.

The Daily Telegraph (London) has an odd story about how the legal code of the “Democratic” Republic of the Congo (which is anything but a democracy) is one of the few left in the world that both a) formally defines witchcraft as a crime and b) regularly enforces that legal ban on sorcery.

The Daily Telegraph reporter notes that the DRC is planning to open a new national prison, and about 20 percent of the prisoners there will be people imprisoned for violating the country’s anti-witchcraft laws. According to the story,

At Bangui police station, a team of detectives specialises in sorcery. To make the investigators immune to the spells of their suspects, they are routinely injected with “vaccinations” of herbs by witchdoctors. They say that this is necessary because the number of those practising witchcraft is rising. Hundreds of women, men and children are charged every year with witchcraft offences, and if found guilty are punished by imprisonment and even execution.

One explanation for the increase is the spread of Aids. More than 17 per cent of the population is HIV positive, and deaths from Aids are often attributed to sorcery rather than from unprotected sex or infected blood transfusions.

How long do we have to wait for Law & Order: Sorcery Division?

Seriously, isn’t it weird to live in a world where some people use PDAs with more computing power than supercomputers used to have while other parts of the world are still imprisoning people for being witches?