According to the CIA,

It was the height of World War II and reports of shark attacks consumed the media. At least twenty US Naval officers had been attacked by sharks since the start of the war, raising alarm amongst sailors and airmen who increasingly found themselves conducting dangerous missions over shark-infested waters. To boost morale, the Joint Chiefs of Staff requested the Office of Strategic Services (OSS, CIA’s predecessor) to lead the hunt to find a shark repellent.

Julia McWilliams (better known by her married name, Julia Child) joined the newly-created OSS in 1942 in search of adventure. This was years before she became the culinary icon of French cuisine that she is known for today. In fact, at this time, Julia was self-admittedly a disaster in the kitchen. Perhaps all the more fitting that she soon found herself helping to develop a recipe that even a shark would refuse to eat.

Housed within the OSS until late 1943, the ERE Special Projects division was headed by Captain Harold J. Coolidge, a scientist from the Harvard Museum of Comparative Zoology, and Dr. Henry Field, Curator of the Field Museum of Natural History. Both men were avid explorers, having led expeditions into arctic, desert, and tropical regions. Coolidge had previously organized and accompanied the well-known Kelly-Roosevelt expedition to Indo-China and had a strong working-knowledge about the necessary equipment for survival in the arctic, while Field had led several anthropological expeditions into the deserts of the Middle East.

Coolidge and Field sent a memo to OSS Director General “Wild Bill” Donovan and the Joint Chiefs of Staff, proposing a plan for “unifying and coordinating the work of different agencies in the field of rescue.” Thus the ERE was born, and one of its several projects was the development of shark repellent.

Julia Child worked for Coolidge for a year in 1943 as an Executive Assistant.

“I must say we had lots of fun,” Julia told fellow OSS Officer, Betty McIntosh, during an interview for Betty’s book on OSS women, Sisterhood of Spies. “We designed rescue kits and other agent paraphernalia. I understand the shark repellent we developed is being used today for downed space equipment—strapped around it so the sharks won’t attack when it lands in the ocean.”

As for the shark repellant, it turned out that copper acetate worked best, but a) it seems unlikely that it worked very effectively in real world environments, and b) didn’t deter at all bites from other carnivorous fish such as barracudas and piranhas. (Which doesn’t mean, of course, that the Navy didn’t go ahead and manufacture the stuff anyway).

Actual copy for this t-shirt,

Just when you thought it was safe to boldly go where no one has gone before . . . this shirt strikes! 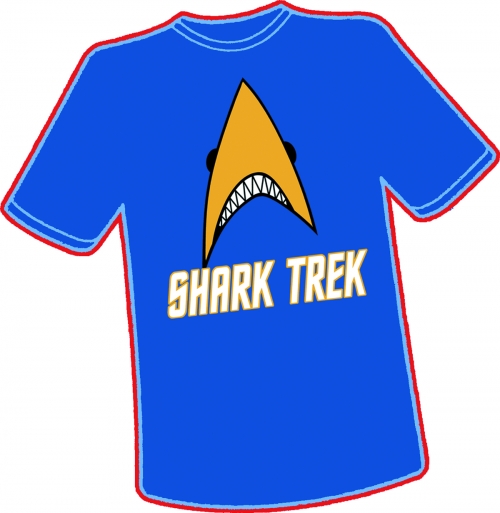 The Shark Foundation claims that,

Alone in New York people are bitten 10 times more each year by other people than worldwide by sharks.

But they don’t provide any citation for this claim, and a number of other sites that repeat this seem to ultimately lead back to The Shark Foundation’s claim. So far I have been unable to locate statistics on the total number of people bitten by others in New York City.

Given the size of New York City and the small number of people bitten by sharks each year, on the surface this seems plausible, but I’d like to find some actual evidence for this claim.

Reuters recently reported on a long-term effort by Australian scientists to use artificial insemination and growing fetuses in test tubes to save the endangered grey nurse shark.

The grey nurse shark is apparently a docile marine creature that used to be plentiful off the eastern coast of Australia. Today, however, there are only an estimated 500 grey nurse sharks left there.

According to Reuters, the grey nurse shark was inaccurately blamed for a number of shark attacks and ruthlessly hunted until the 1960s. Unfortunately the species has never recovered.

Part of the problem is the species’ reproductive system which has evolved to include intrauterine cannibalism. According to Reuters,

. . . grey nurse embryo pups develop a jaw and razor-sharp teeth very early in their development and cannibalize siblings in the womb.

The sharks have two wombs in which a dominant pup will consume its siblings, leaving only two surviving pups every two years when the shark breeds.

But that doesn’t solve the problem of the intrauterine cannibalism. According to Reuters, another group of Australian researchers has come up with an even more radical plan — inseminate and grow grey nurse shark embryos in test tubes.

Once the embryos have developed to a certain size (10 cm) they actually have a fully functional set of jaws and teeth, then they swim around and cannibalize their siblings. We have to bypass this cannibalistic phase. Once the animal gets through that stage it fends for itself. It just swims around the womb eating, we just have to feed it.

All these techniques pioneered with animal research being turned around and used to help save endangered species.

Every year for the past two decades, the Boston Big Game Fishing Club has run its Monster Shark Tournament. Fifty to sixty boats compete to capture the largest shark.

This year’s contest made national news when one competitor captured an almost-1,200 pound tiger shark, although the shark was brought back into the harbor six minutes too late to qualify for the tournament. Still, such a big catch brought national stories and an appearance for the crew on the Today Show.

Please send an e-mail to the Today Show at [email protected] to let them know how
appalled you are by the story they aired on the 8:00am half hour segment,
Thursday, July 21, about the brutal killing of a shark at an annual shark killing
contest off the coast of MarthaÂ’s Vineyard, Massachusetts.

In the segment, the four men who caught the almost 1200lb. shark gushed over
their kill. By the men’s own description, the shark suffered horribly,
struggling for hours, being gaffed again and again, until he was finally dragged on
board, thrashing for air. (Especially chilling was the laughter and
congratulations from the people standing around watching this magnificent creature being
tortured.)

Please let the Today show know that it is bad enough that certain individuals
like to bash sharks for behavior that is completely natural, but it is even
more disconcerting to see a highly regarded show join in on Â“the funÂ” by
making light of the shark’s suffering.

The Humane Society of the United States chimed in as well, complaining in a press release that,

“Contest killing of sharks or any animal is an affront to a civilized society,” said Dr. John Grandy, senior vice president for HSUS wildlife programs. “In this case it contributes to further declines in shark populations while adding to the stigma that surrounds these magnificent predators.”

“Shark killing contests should go the way of the bison killing contests of old. They perpetuate cruel and unnecessary treatment of some of the most ancient and fascinating of the ocean’s creatures,” Grandy said. “Many shark species, including blue and thresher sharks, have suffered dramatic population declines and can ill-afford to be the target of this sort of dubious enterprise.”

Of course, the Humane Society of the United States forgot to mention that the annual contest is carried out with the approval of the Massachusetts Division of Marine Fisheries and actually benefits that public agency.

Gregory Skomal, a shark expert with the Massachusetts Division of Marine Fisheries, told the Associated Press that many of the sharks end up with his agency after the tournament,

You have to kill them to do the samples that produce the best scientific data. We do the same for other fisheries as well. If the shark tournament goes away, we lose an avenue into this type of science.

The meat from the huge tiger shark that was six minutes late was donated to the Long Island Council of Churches.