The local anti-war activists had their downtown vigil to commemorate the 60th anniversary of the dropping of the atomic bomb on Hiroshima. I was probably the only one in the crowd who thought Truman’s decision was defensible and tracked down the Kalamazoo Gazette reporter.

She did accurately capture my words, but I’m not sure my intent came across very well (there’s a reason I blog rather than do public speaking . . . I tend to babble),

Brian Carnell, who also attended the event, holds different views. Carnell said people at such events seem to paint the bombing as a “spur-of-the-moment decision” and “forget the enormity of Japan’s crimes.”

“If it wasn’t for Hitler, Japan’s crime would have been one of the worst in human history,” Carnell said.

Carnell said promoting peace as an absolute is not realistic.

“Idealizing peace without any kind of moral context is problematic,” Carnell said.

One of the leaders of the Kalamazoo Nonviolent Opponents of War, Tom Small, was wearing a t-shirt with a saying to the effect that violence is always criminal. In making my case to the reporter I noted that this the United Nations satisfied Small’s requirement when it abandoned Muslims at Sebrenicia. They didn’t fire a single shot to defend those who came to the UN safe havens.

And, of course, the Sebrenicians were slaughtered. KNOW and Small embrace an idiotic form of pacifism and whose effect is to empower those who engage in violence. Under KNOW’s formulation, every act taken by the Allied powers during World War II was immoral and criminal.

And I was, frankly, angry to see the attack on Japan discussed as if, one day, Truman just woke up and for no good reason decided to nuke Hiroshima and Nagasaki. So there were readings of poems by survivors of Hiroshima, but no time for the millions and millions of victims of Japanese aggression.

It is odd that parts of the Left like this rail on and on about the horrors imposed by the Christian Right on this country, but today finds the U.S. war against a murderous religious dictatorship to have been unjust.

I opened up the newspaper yesterday to see that the local anti-war group, Kalamazoo Non-Violent Opponents of War, is planning a vigil to commemorate the 60th anniversary of the dropping of the atomic bomb on Hiroshima.

Whether or not you agree with the decision to drop the atomic bomb, the results of doing so were certainly horrific, but in their zeal to commemorate that event, activists appear to have selective amnesia about the context of that event and other horrors in the Pacific.

Anyway, this is the letter I fired off to the local Gannett rag,

It was interesting to read that Kalamazoo Nonviolent Opponents of War and other local peace groups are holding a vigil to commemorate the 60th anniversary of the dropping of an atomic bomb on Hiroshima, which killed more than 90,000 people.

Perhaps someday KNOW and other groups might consider holding a vigil for the estimated 10 to 30 *million* people murdered by Japan during its 1937-1945 occupation of China.

Japan’s slaughter in China was not stopped by protesters carrying signs through the streets of Nanking, but rather through the overwhelming application of military force — including the two atomic bombs — by the Allied nations.

Given that KNOW holds weekly downtown protests featuring people holding signs with slogans such as, “War Is Wrong Whatever The Outcome,” a few million dead victims of Japanese aggression is apparently an inconvenient fact, best left unmentioned.

Man, a couple summers ago I was a bit incredulous as I snapped these pictures below, 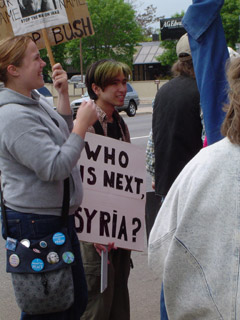 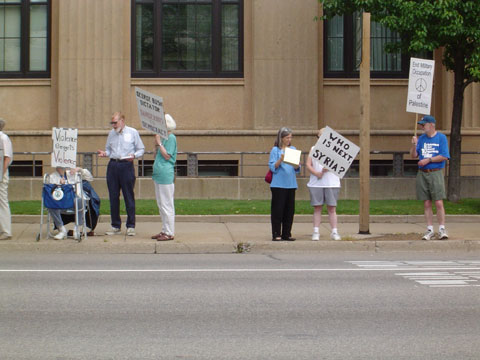 These are from anti-war protests sponsored by a local group called Kalamazoo Non-Violent Opponents of War. I was making fun of them here and here.

But it turned out these folks were absolutely right about the insidious neocon conspiracy. Now along with elections in Afghanistan and elections in Iraq, Syria is facing massive protests in Lebanon that have already brought down its puppet government there.

Damn those neocons — always unfairly targeting these governments and spreading democracy across the Middle East. Don’t those protesters in Lebanon know that they’re protesting the wrong strongman? It is Bush, after all, who is the real dictator. 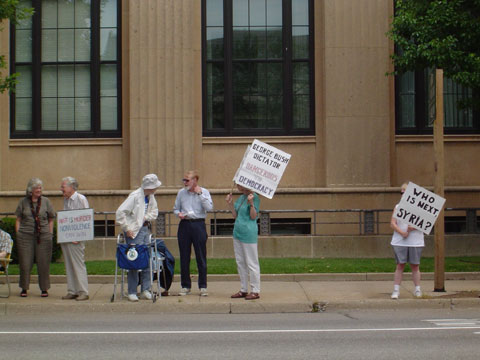 The latest issue of the newsletter for local anti-war protesters Kalamazoo Non-Violent Opponents shows that the group has no problem speaking out of both sides of its collective mouth. Principles, apparently, are for right wing nutcases.

In its online newsletter, KNOW has suddenly discovered freedom of speech,

THIS IS AN EMERGENCY CALL! PLEASE HELP! PLEASE TAKE THE TIME TO DO THIS!
THE RIGHT TO QUESTION AND DISSENT IS UNDER ASSAULT EVERYWHERE–INCLUDING HERE IN KALAMAZOO.

As most of you know, the Sisters of St. Joseph have cooperated with KNOW and PAX CHRISTI to put the “silhouettes” display on their property, atop the stone wall at the corner of Gull Road and Nazareth Road. The Sunday blessing of the sign and the ceremony–with songs, prayers, petitions, readings from the Bible and the Koran–was attended by about 150 people and was very moving. If you have not been out there to see the sign, take a trip. It’s very visible as you come into town on Gull Road, and very visible from Nazareth Road, particularly as you go east.

The aftermath has been unpleasant.

First of all, let me thank you for your participation in getting the sign up and for being here on Sunday. Second, as expected, we and Borgess are getting all negative phone calls regarding the sign and even a threat to burn it down. We need to change this around.

Obviously a threat to burn down the display is crossing the line and such threats should be prosecuted. Calling to ask the display to be taken down, however, is simply other people expressing their own right to free speech, not some grand conspiracy against dissent.

But what I really find amusing about this episode is KNOW’s sudden infatuation with preserving free speech. After all this is the same group that back in October urged people to “do all we can to re-elect Don Cooney” to the city commission. One of Don Cooney’s major goals as city commissioner is the shutting down of nude dancing within the city of Kalamazoo because that speech damages families and dehumanizes women.

Of course, KNOW is correct — free speech is under attack everywhere, including Kalamazoo. And KNOW is part of that attack with its wholehearted support of pro-censorship politicians in Kalamazoo.

When George W. Bush visited Kalamazoo on May 3, I really wanted to take time off work to go photograph the anti-Bush protest being organized by the Kalamazoo Non-Violent Opponents of War. Unfortunately it was the first day of class and I couldn’t take the risk of being stuck on the opposite part of town.

Not to worry, though, the KNOW site itself suggests people visit Jonathon Vreeland’s write-up and pictures from the protest. Vreeland only includes two photographs, and one of them pretty much sums it up much better than I could have,

The local anti-war group, Kalamazoo Non-Violent Opponents to War, held a protest on Saturday, March 13 to call attention to the number of people killed in the year since the U.S. invasion of Iraq began. They created life-size silhouettes to represent the dead,

In the middle of the parade of silhouettes was a banner asking this question,

Being the helpful sort, let me see if I can take a stab at answering that question.

As Deroy Murdock noted in National Review, there is some disagreement over just how many people Saddam Hussein’s regime murdered in order to maintain his dictatorial rule,

Assessments of the devastation vary. Last May, Human Rights Watch concluded that “as many as 290,000 Iraqis have been ‘disappeared’ by the Iraqi government over the past two decades.” Last November 20, British Prime Minister Tony Blair said: “We’ve already discovered just so far the remains of 400,000 people in mass graves.” This scale of destruction rivals 1994’s Rwandan genocide.

In the year since the United States invaded and removed Saddam Hussein, those on the Left claim that anywhere from 8,000 to 12,000 civilians have been killed as a result (those figures, by the way, apparently include the civilian victims of terrorism in post-occupation Iraq).

So how many deaths in Iraq? Well, from March 2003-2004 about half as many were apparently killed in the effort to rid the world of Saddam Hussein as Hussein himself murdered every year, on average, for 20 years using the Human Rights Watch estimate.