This image of a storm on Jupiter is based on data obtained by the Juno Jupiter orbiter and then enhanced with exaggerated colors to provide depth and detail.

Beyond being beautiful art these types of color enhancement are also useful for scientific analysis. Enhanced and exaggerated colors draw the eyes to features that are observable in the unprocessed images, but not obvious. High hazes obscuring cloud decks below can be seen in the enhanced color version provided by Dorán. Subtle curves and structures are suddenly clearly areas of turbulence in exaggerated color. The small bright pop-up clouds leap from the artists’ canvas.

The original JunoCam image used to produce this view was taken on July 21, 2019, during Juno’s 20th science pass from an altitude of about 9,200 miles (14,800 kilometers) above Jupiter’s cloud tops. Citizen scientists Gerald Eichstädt, Sean Dorán, and a contributor identified as MEO_23 processed the image to enhance and exaggerate the color and contrast.

This is a pretty cool false color image of cyclones occurring at Jupiter’s North Pole courtesy of NASA’s Juno mission.

Cyclones at the north pole of Jupiter appear as swirls of striking colors in this extreme false color rendering of an image from NASA’s Juno mission. The huge, persistent cyclone found at Jupiter’s north pole is visible at the center of the image, encircled by smaller cyclones that range in size from 2,500 to 2,900 miles (4,000 to 4,600 kilometers). Together, this pattern of storms covers an area that would dwarf the Earth.

The color choices in this image reveal both the beauty of Jupiter and the subtle details present in Jupiter’s dynamic cloud structure. Each new observation that Juno provides of Jupiter’s atmosphere complements computer simulations and helps further refine our understanding of how the storms evolve over time.

Jupiter Abyss is an image generated by NASA’s Juno spacecraft.

NASA’s Juno spacecraft captured this view of an area within a Jovian jet stream showing a vortex that has an intensely dark center. Nearby, other features display bright, high altitude clouds that have puffed up into the sunlight.

Gerald Eichstädt has once again assembled a reconstruction of the Juno probe’s flybys of Jupiter, this one perijove-17.

Gerald Eichstädt put together this video of NASA’s Juno spacecraft making a flyby of perijove 6, the closest point it would come to Jupiter. The video is based on images Juno sent back to Earth. Those images were used to create textures that were then combined with trajectory data to reconstruct the flyby. 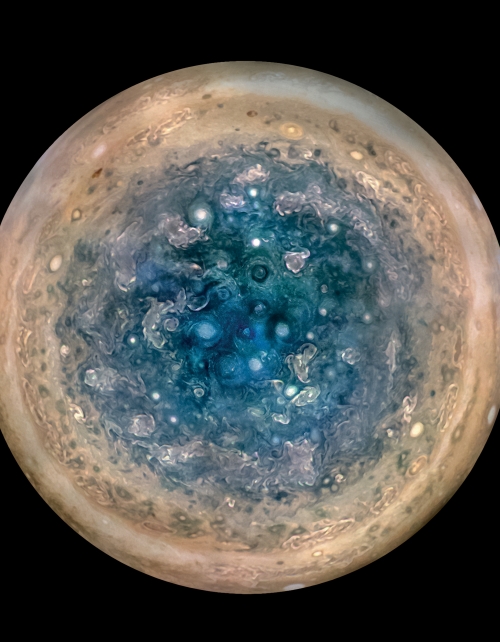