Back in 2002, Amit Paley wrote a lengthy article about a previously secret witch hunt carried out to rid Harvard of homosexual students in 1920. A secret 5-man disciplinary committee interviewed dozens of people and ended up in the expelling of 8 students and the forced resignation of an assistant professor.

The trial was over. The purge had already begun a week earlier. On June 4, Greenough, at the direction of President Lowell, advised Roberts to withdraw from Harvard at once. Over the next two weeks, The Court handed down and recorded a verdict of “guilty” for a total of 14 men: seven college students; Cummings, the Dental School student; Clark, the Assistant in Philosophy; Saxton, the alumnus; and four men not connected with Harvard.

The college students were not just asked to leave campus, they were told to get out of Cambridge—immediately.

Cummings — the dental student — committed suicide shortly after his expulsion, and several of the student had their future academic careers ruined when other colleges inquired why they had withdrawn and were told of the “immoral” dealings the young men had been involved with.

Unsurprisingly, the same Harvard president who authorized the special disciplinary committee — A. Lawrence Lowell — would in 1922 propose a quota to limit Jewish admissions to Harvard. Lowell argued that capping Jewish admissions at 15 percent of the student body was the best way to fight anti-Semitism among the student body. The quota was never instituted explicitly, but instead enacted with the euphemism of “geographic diversity” — admitting more students from rural communities regardless of merit, thereby reducing the number of urban Jews who could gain entrance.

Over at Reason, Cathy Young wrote an uncharacteristically weak opinion piece on gay marriage, The Culture War Over Gay Marriage Is Here to Stay. Young argues that the debate over gay marriage pits traditional American values against each other — equality vs. a long-standing Judeo-Christian moral standard, for one — and because of this argues that the “culture war is here to stay.”

In fact, I think the reality is that while there are surely battles ahead, the culture war itself is already over and traditionalist conservatives lost big time. Consider Young’s analysis,

There is no question that religion has often been used to promote virulent hatred and contempt toward gays. Yet traditionalist objections to same-sex marriage include not only religious scruples but concerns about the consequences of sexual liberation that are shared by many people on secular grounds — concerns about a cultural environment in which 40 percent of children are born out of wedlock and half of all marraiges end in divorce. Is it bigoted to believe that it is ideal for children is [sic] to have a mother and a father, or to worry that same-sex marriage will further uncouple marriage from childbearing and thus make it harder to answer the questions, “Why wait for marriage before having children?”

Don’t get me wrong — these are indeed serious issues. But from a purely descriptive point of view, hardly anything is being done about this. Everyone decries the out-of-wedlock and divorce figures, but it isn’t like there is a mass movement to stigmatize low-performing heterosexuals.

Few people on the right, for example, see Newt Gingrich’s multiple divorces and apparent acts of adultery as in any way deligitimizing his criticism of gay marriage. In fact it is all but unthinkable that anyone today would propose any sort of sanctions on “illicit” heterosexual relationships that used to be common in this country.

The reality is we might strongly dislike the divorce and out-of-wedlock birth rate, but we place a much higher value on our own personal sexual freedom. And that completely undermines all of the traditional arguments about gay and lesbian sexuality which is why the last 30 years have seen barrier after barrier restricting homosexuals fall. Barring the last minute rise of some anti-sexual freedom mass movement, the culture war is already over and it is just a matter of time before gay marriage becomes legalized throughout the U.S. despite the objections of its opponents.

Lee Stranahan took a lot of grief in the comments section of the Huffington Post with his piece earlier this year, Why are gay marriage advocates not defending polyamory? One answer, of course, is some gay marriage proponents don’t see polyamorous marriages as legitimate in the same way they see a homosexual version of a heterosexual marriage as legitimate.

Another response is that there are already legal solutions to polyamorous marriages such as settng up chapter S LLCs, etc. This, however, strikes me as a different version of the “why can’t you be happy with domestic partnerships?”

Ultimately, however, I suspect the reason is that the fight over gay marriage is focused largely on the ‘gay’ part of the equation rather than the marriage part.

Over the past decade or so, it has become less and less acceptable — both culturally and legally — to discriminate against homosexuals. As a result, marriage really sticks out as an area where there is a bright shining litmus test that screams ‘no gays allowed’. To some extent the opponents of gay marriage are correct to the extent that they fear that allowing gay marriage will complete the project of legitimizing and destigmatizing homosexual behavior.

Polyamory, meanwhile, goes pretty much to the core of what exactly we mean by marriage at all, and why we have specific laws that treat married individuals as a separate class.

Personally, I’m all for also recognizing n-tuple marriages; if the cultures of the Old Testament could do it, surely we can too.

Hilarious line from an anti-gay marriage rally in North Carolina earlier this year,

“Why not polygamy, or three or four spouses?” Gibbs asked. “Maybe people will want to marry their pets or robots.”

Providing it is among consensual adults (and dual core processors) there’s nothing wrong in principle with multiple spouses or marriages to robots (I do agree on the pets issue, but I’m not sure how Gibbs gets from consensual marriage among consenting adults to marriages involving animals with clearly extremely diminished mental faculties).

Personally, though, I think people will probably prefer to simply have sex with robots rather than marrying them. For those curious, David Levy wrote a fascinating book about future human-machine relationships Love and Sex with Robots. 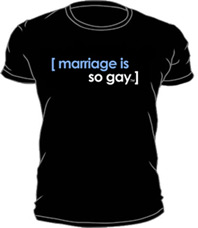 EightMaps.com is an interesting mashup of Google maps and publicly available information on donors to the anti-gay marriage Proposition 8 which narrowly passed in California. So you can select where you live and see if anyone nearby donated to a pro-Proposition 8 group.

It would, of course, be just as easy to set up a similar application showing who donated to groups opposed to Proposition 8 (my wife did even though I told her it was going to pass), so presumably my house would show up on such a mashup.

But using public records, we could get at a lot of interesting data. For example, I’m assuming that marriage records in California are public, so someone opposed to gay marriage could create  a mashup showing the homes of every single gay couple married in California prior to the passage of Proposition 8 (which would include quite a few people who are not residents of California).

All-in-all, this sort of use of public records in general seems abusive and I suspect over time will lead us to reconsider the wisdom of making so many records public. Frankly, I’ve never thought political donations should be public records. The interest in preventing corruption is more than overwhelmed by the chilling effect that mashups like this will increasingly cause.