Epic t-shirt from Fight For The Future. 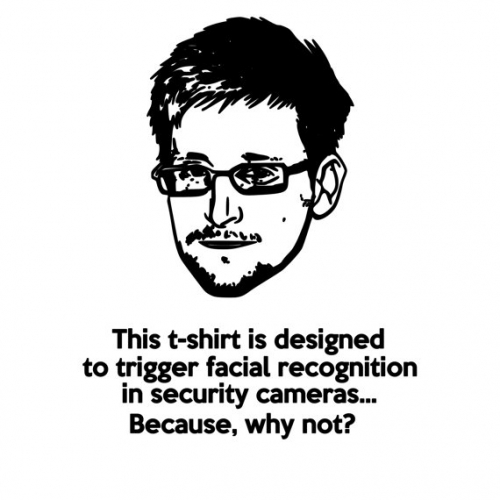 Reason Editor in Chief Matt Welch interviews Sen. Rand Paul (R-KY) and asks if Paul became president how he might handle a hypothetical request from Edward Snowden to return to the United States,

REASON: If on the day after inauguration, you get a phone call and it’s Edward Snowden saying, “Alright, I’m ready to come back,” what are you going to do?

RAND PAUL: You know, I think justice is about making punishment proportional to the crime. And I think his intentions were to reveal something that he felt like the people in government were lying about. And it turns out they were lying.

On the other side of the coin, can you let people who have sensitive data just make the decision to reveal it to the world? I think you have to have laws against that. So I think there have to be laws against what Snowden did. Did he do it for a higher purpose? Does he have a high moral ground? All of that I think history will judge. But I’ve sort of tongue-in-cheek said that if I had the choice, I’d put Clapper and Snowden in the same jail cell for about the same period of time. That’s not a serious question, but I think it’d be an interesting debate they might have about liberty versus security.

Ben Wizner:    Okay. I think we’ll get started. There wasn’t a lot of applause when we came on stage. I guess you are here to see somebody else. My name is Ben Wizner I’m joined by my colleague Chris Soghoian from the ACLU. And maybe we can bring up on screen the main attraction.

END_OF_DOCUMENT_TOKEN_TO_BE_REPLACED

A talk given by Eben Moglen at Columbia Law School on December 4th, 2013

We must now turn our attention from what Mr.Snowden has taught us concerning the scope of our problem to what, with his assistance, we may do to conceive our responses.

We have seen that, with the relentlessness of military operation, the listeners in the United States have embarked on a campaign against the privacy of the human race. They have across broad swathes of humanity compromised secrecy, destroyed anonymity, and adversely affected the autonomy of billions of people.

They are doing this because they have been presented with a mission by an extraordinarily imprudent national government in the United States, which having failed to prevent a very serious attack on American civilians at home, largely by ignoring warnings, decreed that they were never again to be put in a position where they should have known.