ChessHeads is an attempt to cross chess with a collectible card game. There are 121 different cards that are randomly inserted into packs, although a complete set of all 121 cards can also be purchased for $99 at the time of this writing.

ChessHeads first came out around 2004-2005, and unfortunately there just aren’t many reviews out there about how well it actually plays. David Weinstock posted an overview of the game on BoardGameGeek.com back in April 2005 that noted,

So, what’s new with ChessHeads? Two big things, and one of them will be more important to you than the other. Which one will vary by reader. One is a meta-game issue: ChessHeads is a collectible game, and the cards in each box are random. There are no rarity levels; each card is as likely to appear as the next. The other is an in-game mechanic: card effects have to be paid for with “Entigy” (which is just “energy” with some game-world flavor). The usual way to gain Entigy is by capturing pieces.

The addition of Entigy means a game of ChessHeads often comes out of the gate very much like orthochess (that is, “regular” Western chess) as the players must make some captures or play some resource cards before they can start throwing around the board-shattering effects. It is not enough simply to have the perfect card in your hand, you also have to pay for it when you play it.

I’d be interested in hearing from anyone who has actually played ChessHeads or if anyone knows of any formal reviews of the game.

In February, Blizzard and Upper Deck both issued statements surrounding the World of Warcraft: Trading Card Game which Upper Deck had published since its release in 2006.

Coincidentally, the announcement came shortly after Upper Deck reached a settlement with Konami over the Yu-Gi-Oh! trading card game. Until December 2008, Upper Deck had been the distributor of that game outside of Asia. But Upper Deck got caught printing hundreds of thousands of counterfeit cards.

Konami pulled no punches in its press release announcing the settlement,

“This entire situation came as a huge shock to us. As a company that has based their entire business model on producing authentic entertainment and sports licensed products, Upper Deck went against their very core beliefs by counterfeiting Yu-Gi-Oh! TCG Cards,” commented KDE’s Vice President of Card Business Yumi Hoashi.  “It was very disheartening to learn that a trusted business partner would take these actions to dupe us and the Yu-Gi-Oh! TCG community.”

“As a leading company in this card industry, Upper Deck should have known more than well that counterfeit activities would irreparably harm the trust of Duelists and the integrity of the Yu-Gi-Oh! brand,” said KDE’s Hoashi. Upper Deck initially denied those charges and issued press releases announcing that any suggestion that Upper Deck would be involved in counterfeiting activity is “absurd.”

Failing to own up to its actions, Upper Deck sent out a press release on January 29, 2010 stating its satisfaction with the settlement and how the judge ruled against KDE in several areas.  The ruling that United States District Judge Valerie Baker Fairbank made on December 23, 2009 was simple. She ruled that Upper Deck violated trademark, copyright and unfair competition laws by counterfeiting Yu-Gi-Oh! TCG cards.

Blizzard didn’t cite the Konami dispute as its reason for dropping Upper Deck, but certainly any company interested in maintaining its brand would want to think twice (or three or four times) before doing business with Upper Deck after its behavior with the Yu-Gi-Oh! game.

The loss of the license also extends to the World of Warcraft collectible miniatures game.

OMG, I so need several of these Life Counter Rings. That just takes CCGs to the next level. 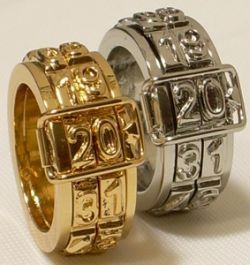