The president is so used to obsequious advisors who fail to dispel his false and made-up facts that he lives in a cocoon of his own mistruth. 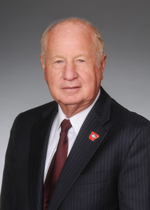 Reason recalls an incident from several years ago where an Arkansas state legislator, Kim Hendren, referred to Sen. Charles Schumer (D-NY) as “that Jew” during a campaign event. As the New York Daily News noted at the time, Hendren then tried to excuse his anti-Semitism thusly,

Hendren excused his remark by pointing to his reputation as a gaffe machine.

“I don’t use a Teleprompter, and occasionally I put my foot in my month,” he told Tolbert, then inserted it a little farther.

“I was attempting to explain that unlike Sen. Schumer, I believe in traditional values, like we used to see on The Andy Griffith Show,'” Hendren said.

“I made the mistake of referring to Sen. Schumer as ‘that Jew’ and I should not have put it that way, as this took away from what I was trying to say.”