The Associated Press recently reported that the possession of illicit cell phones by prisoners at Texas’ Stiles and McConnell units has become such a problem that the Texas Department of Criminal Justice is installing a technology that intercepts cell phone calls and blocks calls made from unauthorized numbers.

According to an FCC document describing the technology,

Legal: Inmate call capture systems are legal when properly authorized by the FCC.

Targeted: Inmate call capture does not jam signals but rather acts like a cellular base station that picks up calls made within the prison and passes along only authorized calls. If a cell phone number is on an approved list, the call will be instantaneously handed off to the cellular phone company and handled normally. If the call is not on this list, meaning it is illegally placed by or to an inmate; the call will not be completed and can receive an intercept message stating that the call is not authorized.

According to the AP story, Texas has been experimenting with the call capture technology and plans to go live in the two prison units in April.

The irony of the situation is that a large percentage of cell phones smuggled to inmates are done so by prison employees. In Texas, for example, 17 former corrections officers were charged with racketeering for smuggling cell phones into prison for inmates.

The problem is so bad that Texas has installed metal detectors that employees are required to pass through when reporting to work in order to cut down on the number of smuggled cell phones and other contraband.

The Spare One Emergency Phone is a clever — if expensive — preparedness option. The manufacturer claims this cell phone will last for up to 10 hours of talk time on a just single AA battery.

In an emergency, you have 911 access or pop in a SIM card from another phone to get full cell phone capabilities. It comes with a waterproof pouch and is touted as being more reliable in extreme temperatures than most cell phones. 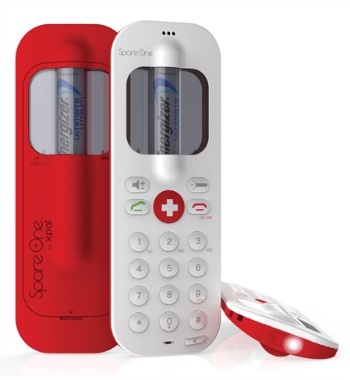