So I was browsing the Internet the other day and came across a reference to Gregory Bergman’s book Geektionary. Geektionary was published in 2011 and described itself then as being “An A to Z Guide to All Things Geek.” As far as I can tell, the book is long out-of-print.

What caught my eye about the book, however, was the bizarre quote on the back cover. 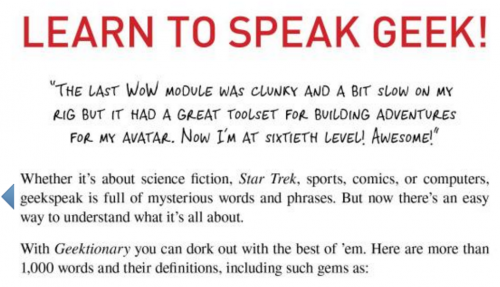 That quote there about World of Warcraft makes no sense and sounds like some of the bullshit you’d here on some crap show like Big Bang Theory,

“The last WoW module was clunky and a bit slow on my rig but it had a great toolset for building adventures for my avatar. Now I’m at sixtieth level! Awesome!”

The last WoW module? A “great toolset for building adventures in WoW”? Seriously? Whoever wrote that had no business writing a book claiming to “explain all things geek.”

According to the Amazon reviews, the book is filled with inaccurate definitions, which isn’t exactly surprising based on that pull quote.