These glass gaming pieces were discovered in a Viking grave dated to approximately 900AD. 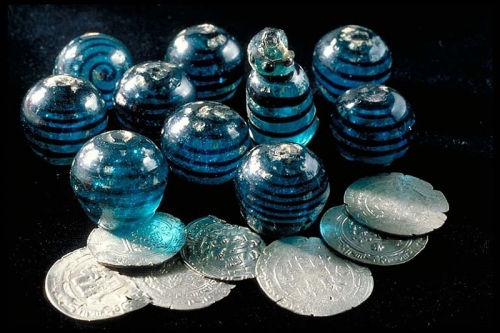 They were used to play a board game called tafl,

Although the size of the board and the number of pieces varied, all games involved a distinctive 2:1 ratio of pieces, with the lesser side having a king-piece that started in the centre. No complete, unambiguous description of the rules of a tafl game exists, but the king’s objective was to escape to (variously) the board’s periphery or corners, while the greater force’s objective was to capture him. The attacking force has the natural advantage at the start of each game, likely indicating an important cultural aspect by mimicking the success of Viking raids. Another cultural indication of the king is that importance of the Viking chiefs’ presence in battle. Although the kings of Europe later claimed divine rule and sat upon the throne rather than bodies in the battlefield, it was essential for a Viking chief to be considered an equal in war. The importance of war is also reflected in Hnefatafl because it is a war strategy game, which can indicate an important reason why the gaming boards have been found with males of all ages. In Balnakeil, a male skeleton between the ages of 8 and 13 was found with weapons and a Hnefatafl board game. Vikings tended to take boys onto the battlefield with them, which explains why young boys also played these war-strategic board games.