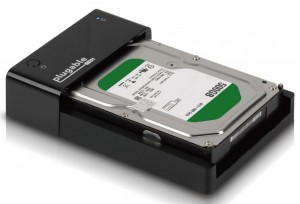 After a couple months with a USB 3.0-enabled laptop, my USB 2.0 hard drive docking station just wasn’t cutting it anymore. Looking at reviews on Amazon, though, it seemed that there were a lot of issues with USB 3.0 docks — in part it seems that the USB 3.0 chipset market isn’t nearly as mature and stable as the USB 2.0 chipsets, which isn’t too surprising.

Then I ran across reviews for Plugable’s USB 3.0 Lay-Flat Hard Drive Docking Station. Reviewers reported no disconnect issues, which plague some docks, and consistently fast transfer speeds. At $29.95 on Amazon, it is also one of the cheapest USB 3.0 docking stations.

I bought one back in February, and after two months of solid use, this is awesome. I’ve been using Thermaltake vertical docks for years, but the Lay-Flat design of the Plugable just makes it so much easier to insert and remove hard drives (at the expense, of course, of taking up more space).

I was worried about potential-heat related issues since the entire underside of the hard drive is in contact with the dock. After doing several large 3-terabyte copy jobs that took 9+ hours to complete, however, I haven’t seen any issues at all (if anything, the hard drives are cooler to the touch after such long operations in the Plugable dock than they are when I do the same sort of intensive job with the Thermaltake).