After my experience with ASUS, I would not recommend purchasing laptops from them. My laptop experienced a problem where it would freeze randomly and would require a reboot. Finally, it refused to boot altogether. I returned it to ASUS on an RMA, but rather than fix the underlying problem — which was almost certainly a bad motherboard — they simply replaced the hard drives and shipped it back. By the time the freezing problem started recurring again, the laptop was past its 12 month (!) warranty. Lousy customer service for such an expensive item. 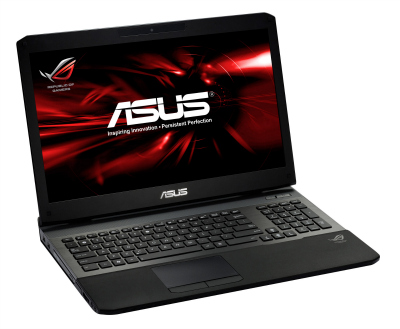 Back in the Summer of 2009, my desktop computer died and rather than replace it with another desktop computer I bought a Gateway P-7809u FX Edition 17″ gaming laptop. It wasn’t going to run new games on ultra settings at playable FPS, but it was good enough for the games I played (in fact I passed them on to my kids recently who use them to play World of Warcraft and a few older games).

Last October, I replaced my Gateway with a more portable and business-oriented Lenovo T420. The T420 is a portable workhorse that lets me do everything I need to do on a daily basis including video editing and multimedia content creation. It will even play World of Warcraft and older games at decent frame rates, but more recent games are largely unplayable on it. So after paying off the T420 I went shopping for a gaming laptop, and ended up purchasing an ASUS G75VW-DH72 last month.

I really don’t care what technical reason they have for doing it — shipping a laptop partitioned like that is idiotic. A quick Google search led me to a freeware tool that made it easy to combine those partitions so I have a C: drive with 256gb of space and a D: drive with 750gb of space, but I shouldn’t have had to even worry about that.

This is the first laptop I’ve had with an SSD drive and it is extremely fast. There were actually a few times when I would reboot the machine and assume that I was looking at a shutdown screen graphic when in fact the machine had already finished rebooting.

I’ve installed most Windows applications to the SSD, except for games which I’ve installed to the hard drive. In general, the system runs extremely fast and smooth.

ASUS sells variations of the G75VW that feature more powerful graphics cards, but for me the GeForce GTX 670M was in the performance vs. price sweet spot. With the 16gb of RAM and Core i7 3630QM it runs all of the games I want to run at a consistent 45-60 frames per second in 1080p. On the other hand, someone who is really into the very latest FPS shooter might find this a bit underpowered and would have to scale back the resolution or visual effects. Here’s a video of me playing WoW at 1920x1080p on the ASUS G75VW (I did have to turn down some of the graphic settings to get 60fps while using FRAPS).

A big difference between this and many other gaming laptops I’ve seen is that the screen on the G75VW is a matte LCD. The one thing I hated about the Gateway P-7809u was the constant glare from its glossy screen.

The other thing I am very impressed about is how the G75VW-DH72 manages heat. The Gateway P-7809u would get noticeably hot very quickly during gaming sessions and the side fan would rev up as if it were trying to shout over my vacuum.

The G75VW-DH72 has rear-mounted fans that I literally never hear going. Moreover, the laptop stays ridiculously cool even in intense gaming situations. If it would actually fit, you could play games with this thing resting on your lap without any problem.

For expansion, the G75VW-DH72 features four USB 3.0 ports, with two on the right front of the laptop and two on the rear left of the laptop. I bought an external Vantec USB 3.0 hard drive enclosure and threw in a Western Digital Caviar Black 1tb drive to some FRAPS recording of games. The USB 3.0 connected hard drive easily reaches 125+ mb/s on sequential read and writes, which is fast enough for what I’m doing (unlike the Gateway laptop, the G75VW-DH72 does not have an eSATA port).

The keyboard/trackpad has also gotten some negative reviews. It is your typical POS chicklet-style keyboard that you’ll see on a lot of Windows laptops. It and the trackpad are certainly serviceable, but I wouldn’t want to have to do serious work using them (then again, pretty much any laptop keyboard that isn’t made by Lenovo is shit IMO). I almost always use an external USB keyboard and trackball with my laptops, so keyboard and trackpad quality are the very last things I care about.

Also be aware that the G75VW-DH72 is freaking huge. I thought the Gateway 17″ gaming laptop as large, but the ASUS laptop is significantly larger (and the build quality appears to be significantly better as well). This will simply not fit in almost all cases designed for 17″ laptops — you’ll need to find a case that accommodates 18″ laptops if you plan to take this with you.

Yes, this laptop ships with Windows 8 64-bit. It is also the Home version so you can’t downgrade to Windows 7 for free as you can with the Professional version.

So here’s my take on Windows 8 after using it for a month. The Windows 8 OS is actually a fairly decent improvement on Windows 7. The problem is that Microsoft saddled it with that piece of shit they used to call Metro. As far as I’m concerned that is essentially unusable on a non-tablet/touch screen interface.

I purchased Stardock’s Start8 for $5 which does two things to dramatically improve Windows 8. First, it puts the Start button, etc. back on the Desktop. Once that’s done, the Windows 8 Desktop acts pretty much like the Windows 7 Desktop. The second thing that Start8 does is let you boot directly to the Desktop, skipping over those crappy Metro tiles.

After I set that up, I really don’t notice the difference between Windows 7 and Windows 8 in day to day usage. Microsoft would do itself a big favor by implementing something like Start8 by default and making Metro optional for folks who have touch screens and might find it useful.

There is one more difference between the Gateway laptop and this one. When I bought the Gateway I paid $1300 for it which at the time I thought was a lot to pay for a laptop. The ASUS G75VW-DH72 set me back $2000 (you can find it some places for about $1900). For me, after using it extensively for a month, it is definitely worth the price. Obviously you could get more power for less money in a desktop and there are more powerful (and more expensive) gaming laptops out there, but this is everything I expected out of a $2,000 gaming laptop.