Below are images from a protest by the |Kalamazoo Non-Violent Opponents to War|
held in downtown Kalamazoo on February 1, 2004:

I count about 25 people there when I showed up about 12:30 p.m. Not a bad turnout
for a cold Michigan winter day. 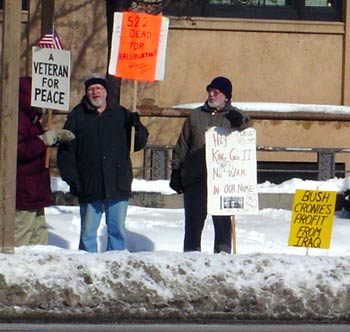 “522 dead for Haliburton.” Hmm, where have I seen that sign before?
I’m still wondering how that guy back in December was counting — maybe he was
using some fractional-based numbering system. 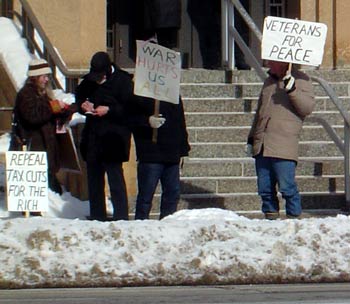 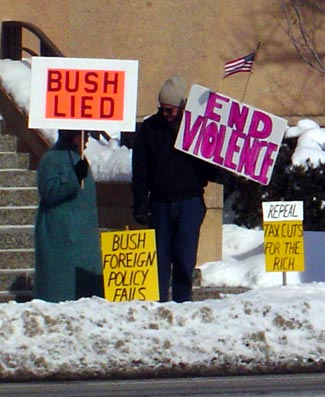 I don’t think you’ll ever be able to end violence, but the war in Iraq was
one giant step toward diminishing it overall in the Middle East. 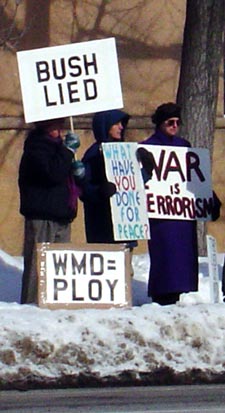 War is not terrorism. 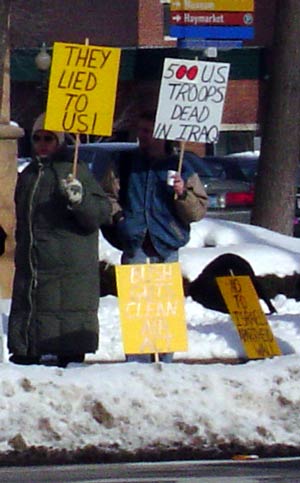 It’s hard to read in this picture, but the sign on the lower right says “No
to Israel’s Apartheid Wall.”

Some of the anti-Israeli left think that the wall Israel is building to separate
itself from Palestinian areas could be used to turn the tide of public opinion
here against Israel. I doubt this issue could ever really resonate with most
Americans, especially given Israel’s understandable need to thwart terrorist
acts against its citizens.

It’s interesting that for all the “End Violence” and “Live Dr.
King’s Dream” signs you see at these rallies, you never see anything specifically
condemning Palestinian acts of terrorism. Israel’s wall is “apartheid,”
but apparently they can’t be bothered to express an opinon about suicide bombers
targeting busses. 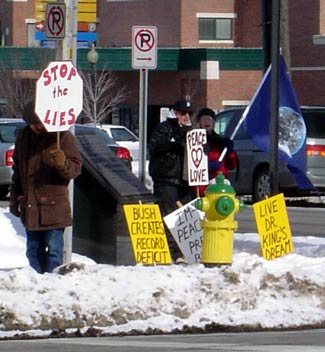 Here we have two winners. First, “Pre-emptive war on Iraq will
has fueled terrorism!” Huh? Where?

Next to that one we have “War is wrong whatever the outcome.” Ah
yes, Gandhi’s philosophical heirs. At least they’re honest enough to put the
central tenet of pacifism for everyone to see it’s absurdity. 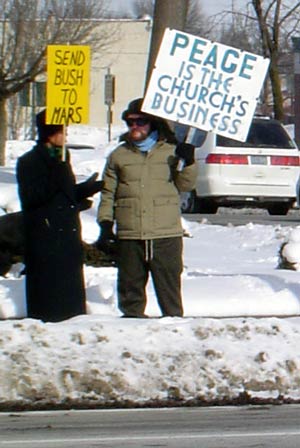