Over the past few years, my action figure collection has grown significantly, while my space to display them has declined. My wife and I have reached an uneasy true on the matter — the house we bought earlier this year has a walled-off finished area in the basement which makes a small 226 square-foot office in which I can stuff all the action figures, legos, and computers I can fit there.

Since I am not the sort of collector who keeps toys mint-in-box, I needed some way to display the action figures in a way that wouldn’t have them all falling over the second my three year old collided into the display.

The solution proved to be Ultarama displays. I’d heard about these several years ago but never really had the place to properly display them, much less purchase them. A few weeks ago, though, I bit the bullet and ordered a couple.

You can see the results in this picture,

I’m in the process of lining two walls with 48″ black bookcases. The displays here sit on top of those bookcases.

On the left is my collection of Teen Titans 3 1/2″ figures, 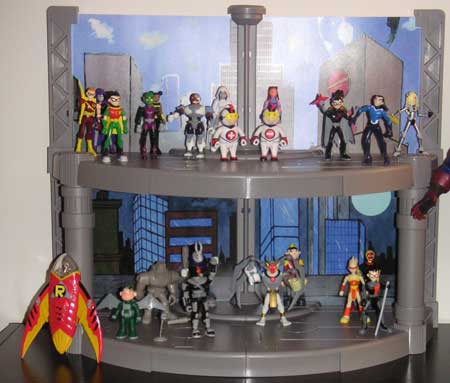 On the right is my collection of Marvel Legends 6″+ figures (the tall figure on the left below is an 18″ Galactus figure assembled from parts included in the recent Galactus Marvel Legends series), 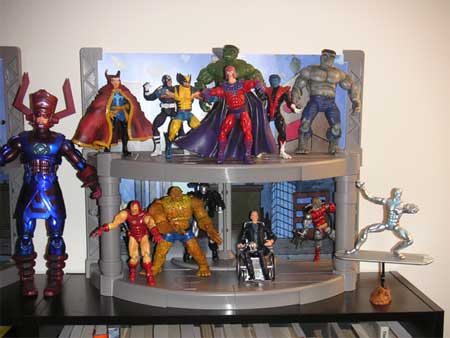 Each set of Ultarama displays set me back $35.90 after shipping and handling and included all the parts needed to make each double-decker section. The floor of each section is littered with peg holes, and the display ships with dozens of pegs for both 3 1/2″ and 6″ action figure sizes.

I’ve got each display configured in a double-decker version, but these can be stacked up to 6 levels high total. I’ve only got room for a 4-level setup before I hit the ceiling, and I am definitely going to add enough to expand each of these to 4-levels (I’ve got 6″ Teen Titans based on the comic that I’m going to put on top of the 3 1/2″ Teen Titans, for example). By the time I’m done, I’ll end up with about six 4-tiered displays, or enough room to display hundreds of action figures in a minimal amount of space.

The only potential drawbacks to Ultarama are the price and some issues with the pegs.

On the price point, putting together my desired six 4-tiered displays is about $450. That’s a lot of money, but on the other hand its hard to buy a single decent glassed-in display case at that price (which I had also considered).

A bigger problem, which is nothing that Ultarama can control, is that peg sizes vary wildly even among identical lines of action figures. There were several slight variations in size of peg holes at the bottom of the figures even within the Galactus Marvel Legends figures, for example. Moreover, quite a few of the figures I own do not have any holes at all which means at some point we’ll have “Adventures In Drilling” at my house (most of the Buffy and Justice League Unlimited figures, for example, lack such holes). In the 3 1/2″ Teen Titan figures, the 3 1/2″ pegs supplied by Ultarama were really not big enough to fit snugly into the holes of the action figures, though they still provide significantly more support than when the figures are simply freestanding.