Moron In Chief Donald Trump was widely mocked for throwing rolls of paper towels at an aid center in Puerto Rico last week. In an interview with Mike Huckabee, however, Trump describes the immense fun he had tossing the towels,

“So next day, they said, ‘Oh, it was so disrespectful to the people,’” Trump continued, referring to the press. “It was just a made-up thing. And also, when I walked in, the cheering was incredible.”

“You were a rock star!” Huckabee interjected. “I saw the video of it!”

“The cheering was, it was deafening,” Trump continued. “They turned down the sound so that you just heard the announcers: ‘Donald Trump.’”

Video of the exchange below:

What the hell is wrong with this man.

Trump reminds me of this guy I knew in college who flunked out very quickly. Even after a week of lectures devoted to it, he could never quite understand the role of NATO in the Cold War. Of course, he’d spend most of the class making sexual innuendos about the instructor, and that was apparently the pinnacle of his cognitive capabilities and achievements.

I’m sure he ROTFLd at these Trump tweets and retweets.

I spoke with President Moon of South Korea last night. Asked him how Rocket Man is doing. Long gas lines forming in North Korea. Too bad! 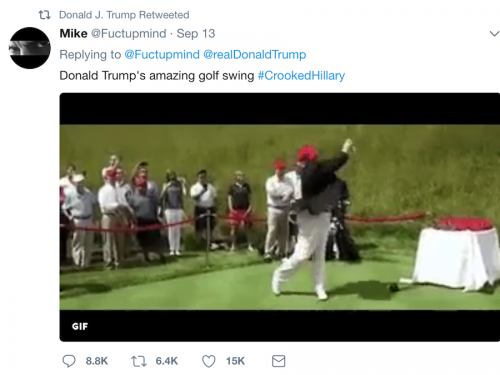