The US Post Office is going to have a series of stamps commemorating some DC Comics characters and specific comic books. 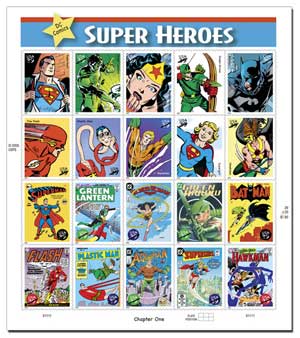 Notice anything missing? That’s right, where am Bizarro?

In March I posted my brief review of the 40th Anniversary Spider-Man CDRom Collection. That was a 9-CD set for about $40 that contained 501 issues of Spider-Man going back to Amazing Fantasy #15. Marvel followed that up with the 44 Years of Fantastic Four on DVD-ROM which collects 550 issues of the Fantastic Four title through 2004 (alas, no Ultimate FF).

I picked a copy up for $50 at the local comic book store (unlike the Spider-Man collection, I haven’t seen this for sale at computer superstores yet).

My first experience with the collection was not happy. I could not get my HP to recognize the DVD-ROM. I sent an e-mail to the tech support folks listed on the box, but did not receive a reply. Fortunately, a Dell machine I use did recognize the DVD. The DVD turns out to be double-layered and I imagine my DVD drive has some sort of incompatibility.

Anyway, although Marvel has gone to a different company to produce the Fantastic Four package, its basically the same. These are high resolution scans of comic books put into PDF files (one PDF file per issue). They include everything — covers, advertisements, letters columns, etc. If it was in the print version of the comic book, its here. The only drawback is that, as with the Spider-Man collection, some of the early issues are scanned from less than pristine comics and the printing method they used in the 1960s wasn’t the greatest to begin with.

On the upside, no copy protection as far as the files are concerned. I simply copied all 5+ gigs to my hard drive and store the disk. Where copy protection does come in is printing. Acrobat will insert a “Marvel” watermark overlay on top of the printed page which is quite ugly. There are, of course, plenty of ways around that, so it’s not much of an issue for me. A non-technical user who wants to do a lot of printing of these comics, however, is likely to be disappointed.

I have never been a big fan of the Fantastic Four, but I was very happy to have the entire run of the book for about $50 after taxes.

But the best news is yet to come. In October, Marvel and Graphic Imaging Technologies will be releasing probably the coolest such set to date — 40 Years of X-Men on DVD-ROM. All 480 issues in that title through 2004 (but again, probably no Ultimate X-Men).

The big question is when is DC going to get in on this? Where is the 65 Years of Batman on DVD-ROM set?

For Father’s Day, my wife hit the mother lode at a garage sale and got me a huge run of Buffy: The Vampire Slayer and Angel comic books in mint condition. I’ve already got the comics in trade paperback format, so I figured I’d frame some of them and display them. A quick Internet search turned up a couple options to display comics in archive-safe enclosures.

Bags Unlimited sells a low-priced solution with its Archival Comic Frames Kits. A frame and matte to display a contemporary-sized comic book is $29. Unfortunately, there are almost no details as to what exactly qualifies this as an archival storage method.

ComicFrames.Com, in contrast, sells a comic book frame that is much more expensive — about $65 each. It comes with a mylar plastic sleeve sandwiched between acid proof matte material. In addition, the frame comes with framing grade acrylic designed to shield the comic from UV light, and ComicFrames.Com sells a number of alternatives to bump up the UV protection if necessary (such as in a brightly lit room).

Back in September I mentioned the 40th Anniversary Spider-Man CDROM Collection — Amazing Fantasy #15 plus issues 1-500 of The Amazing Spider-Man all in one CD-ROM collection for about $40.

I finally managed to pick up a copy recently. Basically, what we have are 501 PDF files containing relatively high-resolution scans of each comic book. This has its advantages and disadvantages. On the one hand, everything is included in each book, including inside covers, advertisements, letter pages, etc. If its was in the book, its in the PDF. Unfortunately, many of the comics that were used for the scans are clearly showing their age. Even more recent books tend to show quite a bit of wear. This is in contrast to Topic Entertainment’s previous Marvel Comics CDROM collection which achieved stunning images by scanning the black-and-white original art in Marvel’s archives and then adding a digitally colored layer which could be turned off.

Storing the scans in PDFs creates a number of issues — the most annoying is that the books were scanned in landscape which means each page in the PDF usually represents two comic book pages. I find this a bit annoying. It does preserve the occasional two-page layout, but for the most part I’d have preferred to have my monitor filled with one page rather than two.

The user also has to use Adobe Acrobe 6.0 or later, or a “Marvel” watermark will appear superimposed on the pages. That watermark always appears when you print the page, so if you really want to print anything you’ll need to grab a screenshot. That’s stupid behavior IMO. What’s the point in nerfing printing like that, especially since its trivial to circumvent?

Other than that, the PDFs aren’t DRMed, in that you don’t need to register the Acrobat Reader or anything. I quickly copied all 6+gb of PDFs to my portable hard drive so I can read them on any computer I happen to be using at the moment.

Overall, its not perfect, but at less than a dime per comic, this is the bargain of the century. And coming soon is a Fantastic Four CDROM reproducing the entire 30-year run of that book. It truly is a great time to be alive.

Last year I noted how cool the Marvel Comics CDRom was. That package featured the first 10 issues of ten Marvel comic books. Apparently that sold well enough that Marvel is upping the ante ahead of the DVD release of Spider-Man 2 with the The Amazing Spider-Man Fortieth Anniversary Collection.

This time around, the collection will feature Amazing Fantasy #15 plus issues 1-500 of The Amazing Spider-Man on 10 CDs.

The same company that did the Marvel Comics package, Topic Entertainment, is also publishing the Spider-Man set so hopefully it will be as well done as the earlier offering.

The Amazing Spider-Man Fortieth Anniversary Collection will be released in October and retail for $49.99. I can’t wait.

Yahoo! Entertainment actually has an entire story devoted to Wonder Woman’s new haircut. Superman had to die to get mass media interest, but Wonder Woman just has to cut her hair?

Is there any gimmick DC won’t try to improve their sales? And with a lineup that includes books like Aquaman Secret Files can you blame them?