Here’s an excellent guide to creating a chess set out of nuts & bolts: 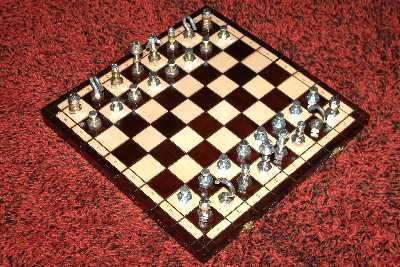 Lego has released an nice-looking Knights’ Kingdom Chess Set complete with carrying case to store the Lego chess board and all the minifig chess pieces. 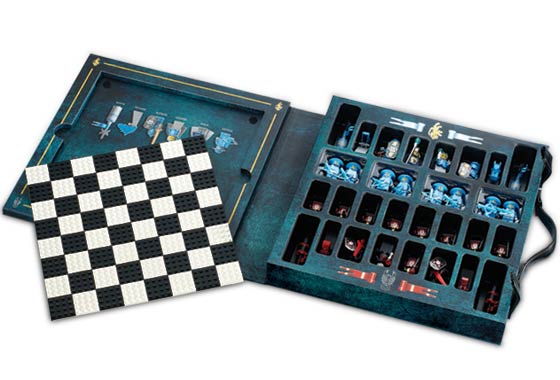 The New York Times had a story earlier this month about the problems faced by high level players in the computer age. This story wasn’t about computers beating humans at chess, however, but rather about whether or not lesser human players are obtaining unfair advantages because of the proliferation of databases of chess games that make it possible to study their play with computers and occasionally beat them by finding obscure flaws in their game.

The Times opens with the case of international chess master Jay Bonin. According to the Times,

Mr. Bonin is more active than most elite players, but he is doing what most serious players have long thought is necessary: playing frequently to stay in peak form. Now, however, because of the widespread availability of databases of games and the growing strength of chess software, such activity may actually be making it easier to beat him.

Mr. Bonin said that he recently lost a tournament game to a weaker player who had not competed in years, but who had sprung a surprise move on him in one of Mr. Bonin’s favorite openings.

“The line he played reeked of preparation,” he said.

This is obviously not cheating, but quite a few people including Gary Kasparov and international chess master Gregory Shahade tell the New York Times they think it has made chess openings less fun and creative. As The Times reports,

Before people started using databases, a player who came up with a new move in an opening might be able to use it several times before enough people found out about it to start preparing for it. Now innovations are known almost as soon as they are played. “The profit maybe is very small,” Mr. Kasparov said. “You can only use it one game.”

Of course, as The Times points out, it was in large part due to the urging/suggestion of Kasparov that the preeminent chess database, Chessbase, added sophisticated searching so people can easily find all the games where Kasparov or any other players ends up in some specific position and then analyze how the player reacts, making preparation that much easier.

There are some contrarians. Estonian grandmaster Jaan Ehlvest contends that rather than allowing weak players to beat stronger players, the major effect of computers has been to accelerate the speed at which players realize their potential. According to The Times,

Mr. Ehlvest added that in any case he did not believe that computers made people better than they otherwise would be. Instead, they can help them reach their potential sooner.

“Now you see 14-year-old grandmasters because they accumulate information much faster than in my day,” he said.

The BBC’s story pretty much sums it up, Kasparov falls to crushing defeat. After thirteen draws and two wins for challenger Vladimir Kramnik, Gary Kasparov’s 15 year complete dominance of chess came to an end.

The BBC has a story covering Gary Kasparov’s 16-game defense of his world chess champion title against Valdimir Kramnik. In the 15 years he’s held the title, the only time Kasparov has lost was to a computer back in 1997.

The match is sponsored by BrainGames.Net. The web site has will be web casting the games live, as well as providing analysis and annotated move lists of the tournament. They’ve also got a nice page full of past games, complete with annotation, between Kasparov and Kramnik (the two have met 23 times, with Kasparov winning 3 times, Kramnik winning 3 times, and 17 draws).

PGN to JavaScript tool on CoolTool.Com I was so geeked I dropped everything I was doing to download and play around with it. Bottom line — this thing rocks.

For those of who are not chess fanatics, PGN is the most common format for describing chess games. It is a fairly straightforward text format describing the date of the game, the players and then a list of moves. What the PGN to JavaScript tool does is convert a PGN file into a JavaScript mini-applet that simulates a chessboard.

For example, check out this game that I played on Chessmaster 6000 over the weekend. Note that although I love chess I pretty much suck at it and I set Chessmaster 6000 to what I call the “idiot” level so even I could beat it (i.e. if you know anything about chess, this game is probably likely to make you giggle at my moves). But watching the game replayed via the web is just enough incentive to make me want to crack all those chess books I have been collecting over the years and get with it improving my game.

I wish there were more applications like this to take real world stuff and easily put it on the web.