Out of the Park Baseball 9 was released a couple months ago and has received nothing but great reviews since. Gamespot called it “the best game in the history of the franchise” which is another way of saying it may be the best baseball sim ever (and since OOTP doesn’t have a huge advertising budget with Gamestop, this is a legit review rather than one bought and paid for with advertising dollars).

Gamespot’s one criticism is that it may be a little stat heavy which is a bit like calling a supermodel too sexy. A sports sim that is too stats heavy is like a square circle — it is a logical impossibility. 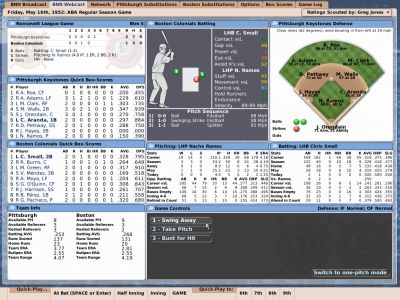 Despite my love of baseball sims in general and Out of the Park Baseball, specifically, I pretty much ignored the 2006 version and never even considered purchasing a copy — OOTP 2006 came in seriously late and then buggy as hell. The discussion forums made entertaining reading for months after release.

Now, OOTP 2007 is a little over two weeks from release and, based on the feature list and comments from beta testers in the OOTP forums, this is going to be the sim that everyone had hoped OOTP 2006 would be.

The feature changes from 2006 is jaw-dropping impressive.

I’m still going to wait and see what sort of reviews this gets in the first couple weeks after release, but this looks like it could be the best baseball sim yet.

I was doing some online reading about baseball statistics the other day and happened upon an awesome story of a stunt pulled by some opportunistic telegraph operator in 1912.

The Telegraph operator was Lou Proctor, and what good old Lou did was insert himself into the box score of a Browns-Red Sox game. He put himself down as a pinch hitter who walked in his only at-bat in the game.

What is so cool about Proctor’s stunt is that it wasn’t uncovered until 1987, so for 75 years Proctor remained listed as having had that one at-bat as a major leaguer.

I wonder what Proctor thought of his long-running stunt. Did he tell tall tales of baseball heroism and pull out the box score from that day as proof? Or did he share the sheer brilliance of a well-done hoax with his family and friends?

I’m not a big fan of baseball, but baseball sims are to die for and Out of the Park Baseball 2006 looks like it could be the mother of all baseball sims.

One of the things I’ve always liked about previous OOTP games is the ability to create and customize leagues in any number of ways. But the 2006 version looks to blow away its previous incarnations when it comes to customizing,

So what does this all mean? It means that you can set up your virtual baseball world the way you always imagined. How about a world with a league in every country of the world, with 16 teams each? You can do that. And each of these leagues can have as many minor leagues attached to it as you want. Then you can add any historical season to your world, via importing from the free Lahman Database. Or if you want to mirror the current real life setup (including all minor leagues down to rookie ball), you just need to click a single button. Then add the Japanese league, Korean league, Cuban league, some winter leaguesÂ… you name it.

And if that’s not enough, the developer is vastly expanding the range of statistics that OOTP tracks,

So far, so good. Lately when you watch a baseball game on TV that has a statistically educated commentator (sorry Mr. Morgan, that doesnÂ’t include you), you hear terms like Â‘this guy is a tough out, batting almost .270 even with 2 strikes on himÂ’ or Â‘he has been successful at night this season, hitting 30 points higher than in day-gamesÂ’. OOTP can do that as well, and even better, for every statistic of the basic stats sets tracked during the current season. Here are the splits that are supported in OOTP:

OK, thatÂ’s pretty cool already, right? So you can check out how your shortstop batted on the road this season. Or how many doubles your favorite pitcher gave up in June. Or the batting AVG of your cleanup hitter when heÂ’s up there with the bases loaded.

Anyway, I felt the more stats, the better. And it doesnÂ’t slow the game down! Also, all player lists can handle these stats, so you can check who leads your league in hitting with runners in scoring position against your own team.

That’s my kind of baseball sim developer. There is absolutely no such thing as too many stats.

Man, I can’t wait until this is finally released sometime in the next couple months.